The photo art is from John Wassenberg’s fb page 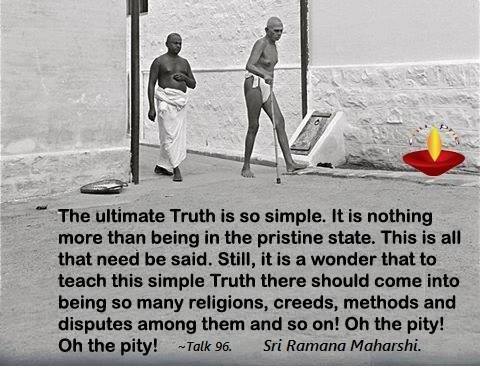 Bhagavan says, “…it is a great wonder that to teach such a simple truth a number of religions should be necessary and that so many disputes should go on between them as to which is the God-ordained teaching. What a pity! Just be one’s Self, that’s all.”

Bhagavan’s teaching is beautiful and unique and direct. There is no mumbo jumbo, no secret mantras or handshakes, no dependence of rituals or outside forces. Bhagavan says that you are the Self. Being the Self is nothing more than pure Being, Pure Existence.

In the path Bhagavan outlines, no importance is attached to seeing of lights, visions, and having various experiences. Bhagavan says always, “Find out who has these experiences”. Hence the inquiry, “Who am I?” should be continued until the false sense of “I” vanishes completely and the Self shines spontaneously and naturally.

Major Chadwick: But people will not be content with simplicity; they want complexity.

Bhagavan: Quite so. Because they want something elaborate and attractive and puzzling, so many religions have come into existence and each of them is so complex and each creed in each religion has its own adherents and antagonists (Talk 96).

“It is only those who are mature that can understand the matter in its naked simplicity” ~ Bhagavan in Talk 96.