The Perfect Meeting_Ramana and Ramdas 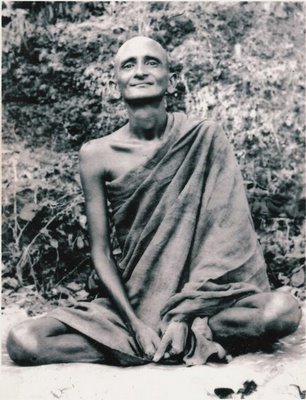 Swami Ramdas describes how he attained the Divine Vision through the Grace of the Bhagavan Sri Ramana Maharshi. Swami Ramdas was called “Papa” by his devotees.

“Papa,” I asked Swami Ramadas ,”Would you mind telling us about your final Realization which they call ‘Vishvarupa Darshan’?”

He readily acquiesced and gave a long description of his burning aspiration and yearning which had led him to Arunachala Hill, hallowed by the tapas of the peerless saint Bhagavan Ramana Maharshi. I can give here only the gist of his long narration ….

Papa (Swami Ramadas) then started speaking. Please note that Swami Ramdas refers to himself in third person as was his habit. Now the story as retold by Swami Ramdas:

One day the kind Sadhuram (a disciple of Swami Ramdas) took Ramdas for the darshan of a famous saint of the place named Sri Ramana Maharshi. His Ashram was at the foot of  Arunachala. It was a thatched shed. Both the visitors entered the ashram and, meeting the saint, fell prostrate at his holy feet.

It was really a blessed place where the great Bhagavan Ramana lived. He was young then but there was on the face a calmness and in his large eyes a passionless look of tenderness which cast a spell of peace and joy on all those who came to him.

Ramdas was informed that the saint knew English, so he addressed Ramana thus:

“Maharaj, here stands before thee a humble slave. Have pity on him. His only prayer to thee is to give him thy blessing.”

The Maharshi turned his beautiful eyes towards Ramdas and looked intently for a few minutes into his eyes as though he was pouring into Ramdas his blessing through those orbs, then shook his head to say he had blessed.

A thrill of inexpressible joy coursed through the frame of Ramdas, his whole body  quivering, like a leaf in the breeze ….

Now at the prompting of Lord Rama (Ram), Ramdas desired to remain in solitude for some time … The sadhuram was ever ready to fulfil his wishes. Losing no time, he took Ramdas up the mountain behind the great temple. Climbing high up he showed him many caves. Of these, one small cave was selected for Ramdas, which he occupied next day. In this cave he lived for nearly a month in deep meditation of Ram. This was the first time he was taken by Ram into solitude for his bhajan. Now he felt most blissful sensations since he could hold undisturbed communion with Ram. He was actually rolling in a sea of indescribable happiness. To fix the mind on that fountain of bliss, Ram, means, to experience pure joy … He went on taking the Name (Ram) in an ecstasy of longing when, lo, suddenly his Lord Rama … appeared before him and danced and danced …

“Did you see Lord Rama with closed eyes or open?” I interjected.

“With open eyes, as Ramdas is seeing you,” Papa answered. “But it was not this momentary vision that Ramdas’s heart craved. For he knew that a vision like this, was unlikely to last and so, when the Lord would vanish, Ramdas would revert to his darkness. Therefore he prayed for the great darshan, the Vision of visions, which comes to stay for ever so there is no more parting, namely the Vishvarupa Darshan, longing to see Rama always in everything; that is nothing less would satisfy Ramdas.”

Papa paused and then resumed with a beatific smile: “And it came one morning and the entire landscape changed: All was Rama, nothing but Rama – wherever Ramdas looked! Everything was permeated by Rama -vivid, marvellous, rapturous – the trees, the shrubs, the ants, the cows, the cats, the dogs – even inanimate things pulsated with the marvelous presence of the one Rama. And Ramdas danced in joy, like a boy who, when given a lovely present, can’t help breaking out into a dance.”

‘And so it was with Ramdas: he danced with joy and rushed at a tree in front, which he embraced because it was not a tree but Rama Himself! A man was passing by, Ramdas ran towards him and embraced him, calling out: ‘Rama, O Rama!’ The man got scared and bolted. But Ramdas gave him chase and dragged him back to his cave. The man noted that Ramdas had not a tooth in his head and so felt a little reassured: at least the loony would not be able to bite him!”

Papa laughed out and we swelled the chorus.

“And then?” I asked, after the laughter had subsided.

Papa said,”The bliss and joy came to be permanent, like a torrent rushing downhill till it finds a placid level of limpid purling stream. This experience is called sahaja samadhi, in which you can never be cut off from the consciousness of being at one with the One who has become all, in which you feel you are one with all because you have perceived that all is He, the One-without-a-second.”

Finally we end with a comment made by Swami Ramdas – about forty years later.

“Ramdas went to Ramana Maharshi in a state of complete obliviousness of the world. He felt thrills of ecstasy in his presence. The Maharshi made the awakening permanent in Ramdas.

Some people told Ramdas: “You went to Maharshi and you got illumination. Give us illumination like that.”

Ramdas said, “You must come to Ramdas in the same spirit and in the same state as he went to Maharshi. Then you will also get it. Where was his heart? How intense was his longing? What was the world to him at that time ? If you come in that state it is all right.” 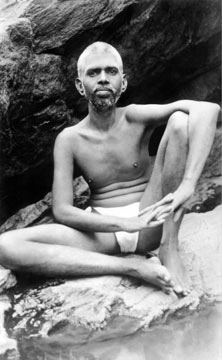 Source for this article: The Mountain Path

Editor’s note: Minor edits were made to the original. Harsh K. Luthar

7 thoughts on “The Perfect Meeting_Ramana and Ramdas”