(Pictures in this article come from www.toontracker.com/totaltv/underdog.htm)

Do you remember that cartoon show “Underdog”? You might have watched it as a kid in the 1960s and early 1970s. Underdog was a “humble and lovable Shoeshine Boy” who had a secret identity. 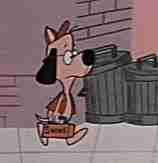 Whenever there was a serious world crisis or threat to the city, Underdog would turn into a superhero after taking a special vitamin pill from the secret compartment in his watch.

Underdog was probably the best boyfriend Sweet Polly Purebred ever had. No matter how far away and how deeply engrossed in shining shoes of his customers, Underdog could always hear Sweet Polly calling out his name. The “humble and lovable Shoeshine Boy” would slip into a phone booth and emerge as the champion of justice and protector of Sweet Polly. Underdog had super sensitive hearing, at least when it came to Sweet Polly. No doubt this would have resulted in a happy marriage if they had ever tied the knot. Underdog would often say, “When Polly’s in trouble I am not slow, it’s Hip, Hip, Hip and away I go !” 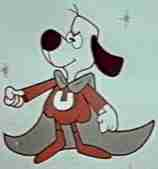 Underdog always came to Sweet Polly’s rescue, yelling, “Never fear, Underdog is here!” Sometimes Underdog took his time and Sweet Polly had to yell help for a long time. This was not easy on our ears as kids. But we hung on. We strongly suspected that Underdog would indeed arrive at some point.

When Underdog finally came, it was a great consolation. We did not really want Sweet Polly to get roughed up by the bad guys. Unfortunately, Underdog was no muscle dog. He had a small chest and a big belly. He was a heart attack waiting to happen according to modern medical standards on waist to chest ratio (which were probably not well known when the show started in the 1960s). In fact, Underdog often became exhausted within a few minutes in his fight with the bad guys and looked for his vitamin pill to get his vitality back. Not being able to locate the magical nutrition pill in time posed a serious problem to Underdog’s health.

It was awful to watch and we were full of tears as Sweet Polly looked for Underdog’s backup energy pill in her purse while Underdog was beaten to a pulp by the bad guys. Sweet Polly always found the needed vitality tablet for Underdog at the last minute, but not before giving everyone the distinct impression that she was very disorganized.

The magic pill, once found, was a life giving elixir. As soon as Underdog put it in his mouth, the effect was immediate. The vitality pill always seemed to bypass Underdog’s digestive system and go straight into his muscles. Typically Underdog swallowed the pill in one gulp and regained his energy the next instant. Then he would beat the surprised bad guys quickly before the show ended. Underdog always saved the day including, of course, Sweet Polly.

I was recently thinking that in real life, some people are like Underdog (who don’t have a Sweet Polly), and some are like Sweet Polly (but without their own personal Underdog).

We certainly lack that magic vitamin pill that Underdog had in the secret compartment of his watch. But even for Underdog, the effect of the magic vitamin pill was only temporary. He had to keep taking those pills to maintain superhero status.

One wonders where Underdog got his supply and the money to pay for those pills. After all, he could not have made much as a shoeshine boy. Perhaps he got big tips from his customers. Maybe Underdog had really good health insurance and there was low co-pay for those very strong vitality pills.

It would have been nice to have a big wedding for Underdog and Sweet Polly Purebred at the end of the final season. I can just see Sweet Polly saying to Underdog before they went off on their honeymoon, “Underdog darling, make sure to pack some extra energy pills for the next two weeks.”

Maybe there will be an Underdog movie which will show that Underdog and Sweet Polly Purebred got married and lived happily ever after. If they did it right, the Underdog movie would be blockbuster!

Underdog and related characters are © 1997 GBPC, a subsidiary of Golden Books Family Entertainment.