Boundless Bliss flooded the Heart of Beauteous Mother Earth,
A  Sage came as Ramana to save us, he took a human birth.

Because the Lord of Mercy whose days on Arunachala Hill
Led a life of glory that ever shines and clears away all ill,
By his Great Realisation of that Everlasting Truth,
Revealed by Lord Krishna in his Bhagavad Gita forsooth:
Like Dakshinamurti in Samahdi was shown to man by Shiva,
An emblem of silence, revealed to Great Sage Sanaka.

He’s the revered Enlightened Master and gracious guide
Of all learned scholars with Ganapati at his side.
He’s possessed of all the highest virtues known to man,
His Radiant effulgence is manfully clad in body’s plan
Of material sheaths, when weaved together make five in sum.
Behind dark worldly clouds he shines, a brilliant blazing Sun!

He’s perfect as the ruler over those five senses so unruly,
He sees only merits in others, so clearly and so truly,
He ever abides in the blessed blissfulness of peace,
In his Being, pernicious poisoned passions have long ceased.
He lives only on the free offerings of caring devotees,
He dwells as an ascetic on hill slopes, ever there to please.

His Heart is proof against sharp barbs of carnal desire,
He’s the living embodiment of Lord Agni’s sacred fire!
He’s devoted his days to teaching Knowledge of Jnana,
He’s crossed the stormy ocean of dreaded Samsara.
He uses his hands soft as a lotus to serve as a bowl,
Fear ends for souls taking refuge in Him to make themselves whole.

At his feet, by his intensive and most powerful gaze
His auspicious presence is felt as a fierce fiery blaze.
He crushes the load of devotee’s dark misery to dust,
And scatters it along with latent tendencies of lust.
He’s a safe haven of protection, security and peace,
His brightness of light chases away sorrow with ease.

His virtues are mirrored in rocks, streams and leaves,
His wise truthful words calm any soul who grieves.
He’s never over elated by praise nor depressed by blame.
He’s foremost among all Sages, world famous his name!
He’s relentlessly cut off all despicable ego-minds,
He’s overthrown all inner enemies that mankind finds,

Greed, anger, lust, jealousy, pride and infatuation.
He’s immersed in a flood of blissful sublimation,
He’s climbed the peak of mountainous transcendental height,
Through his own vision he’s seen Divinity’s dazzling light,
Well-nigh impossible for poor suffering ignorant others,
He’s free from arrogance; he feels all men are brothers. 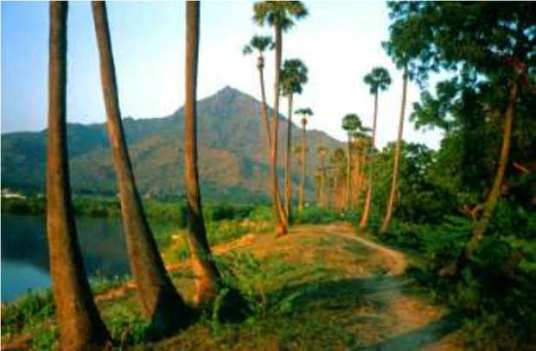 In ancient times he pierced Krauncha Hill like Skanda,
To forego joys of being fondled by his mother Uma,
That he might be reborn in human form as Sri Ramana,
To shatter dense spiritual darkness of Earth’s samsara.
As an ascetic wearing only a clean loin cloth of white,
He rode on the back of a Celestial Peacock, fan-tail so bright.

He’s now descended as a humble soul on dear mother earth,
To reign over the world, a Master unique in human birth.
Salutations to that One who transcends all attributes,
The celibate, with human skills and talents most astute.
The master and slayer of dark diabolical Taraka,
An emblem of man’s dark ignorance, an arrogant asura.

There’s no divine peacock that can bear one of his ilk,
No Ganges he can bathe in, no nectar of mother’s milk
From the breasts of Goddess Parvati, no celestial choir
Of vina players to sing and gently wile away each hour.
Oh great pounder of Krauncha Hill! how do you still abide
On sacred heights of Arunachala, evermore to reside?

He’s a God divine but sports only a single face,
He left his fond Mother Parvati’s sacred place.
He doesn’t wield a silver spear in his nimble hand,
He takes human form to deceive this sleeping land,
He hasn’t celestial armies marching for him there,
Enough of this mask by which you bewitch the unaware!

But how will you escape your brother Ganapati’s sight?
Some worship you as best among Realised Rishi’s bright,
Some as a Jnani, Great Guru of Gurus, beyond compare,
Others as an humble ascetic, wise, comely and fair.
But all of them prostrate before your sacred lotus feet,
Yet only two or three see you as Skanda, a God who’s complete.

You explained the significance of Aum to Great Lord Brahma,
You spoke to tell Truth to your father, sacred Lord Shiva.
You’ve kindly become the teacher of your elder brother
Ganapati, to whom you’re beloved as his mother.
Subrahmanya you’ve outstripped your elders by such merit,
For generations to come, much sage wisdom they’ll inherit!

The seat of honour reserved for those of most worth,
Once enjoyed by Great Sage Vyasa of high noble birth,
Later by dispeller of darkness saintly Lord Shankara,
Now awaits you, the Master Sage, Great Lord Ramana!
Commander in Chief of the Celestial Army’s plan,
You’ve now come to planet Earth embodied as man.

Now when righteousness and religion seem at an end,
When all worlds are driven mad around sanity’s bend,
And wretched scholars have lost sight of Ultimate Truth,
Disputing polemics; when even God’s Existence forsooth
Is disputed, who else can be our safe haven and refuge?
Oh Skanda born on Earth as man, save us from such deluge!

Though dispassion’s crucial, can you withhold your grace replete?
Though effortlessness is desired, must worship of your holy Feet
Be condemned? Though desire’s wholly contemptible for you,
Would that cause you to cease from guarding your Sadhaks true?
Oh Skanda hidden in a handsome body with a human mask,
Why do you still bide your time? I most respectfully ask

Away with empty dispute, discourse and discussion vain,
Righteousness! no longer need you weak or limp so maim,
Bewilderment and confusion will be wiped from the world,
Good shall flourish everywhere and Truth be unfurled!
Because our Lord, foremost of Guru’s, the son of Parvati
Was once incarnate on Earth with his brother Ganapati.

Oh mankind, revere this brother of Ganapati, the Master
Who’s came In bodily form for now and for ever after.
The Self, pervading the microcosm and the macrocosm,
Who is behind the souls of all, model of perfect altruism.
Source of the ego in which all weird difference is lost,
Who drags his children to Moksha regardless of cost.

Hail Bhagavan Ramana Maharshi, Universal Master!
Dispeller of misery from this sad world ever after,
Who chases away darkness from his dear devotees,
As Pure Eternal Consciousness ever ready to please,
Abiding in the Heart, blazing bright within and without,
Bereft of the least trace of ignorance, with none left to doubt.

Self’s the transcendental Truth that’s underlying
The world and beyond, there can be no denying.
Oh Ramana, pray turn your gracious glance my way,
So that I may be eternally blest, forever on this day.
Oh Bhagavan, you’re the JAGADGuru of all mankind,
Your boundless Heart knows no differences, so I find.

Troubled world, egotism and God are now all observed,
As one transcendental Reality by virtue of your word.
The recalcitrant wicked ego has been struck down to die,
I now exist as that One Reality which isn’t apart from ‘I’.
By your Grace our Hearts readily realise the Divine Self,
Hidden within the perverted mind, that vile demonic elf.

Blessedness isn’t a virtue for you, oh Prince of Sages!
Its natural in your shining Heart you’ve known for ages,
Oh Spotless Being your form blazes with effulgent light,
Infinite is your penetrating gaze, so brilliant and bright.
Oh Lord your egotistic mind has vanished in your Heart,
You dwell in Eternal Sat Chit Ananda, never to depart!

You’re the acknowledged chief among ascetics severe,
You’ve been deputed to roast Souls for the Lord WHO is near,
You chop up egos and well season them for tasty food.
I worship and revere you, who does each deed for good.
You pierce through our ignorance dwelling in the heart,
By virtue of your Grace, and piercing glance you will to impart.

You’re beatific, but your poor devotees are of little worth,
Thrown headlong into a sea of uncertain death and rebirth,
Being drowned in their worldly desires without respite,
And falling endlessly exhausted every noon and night.
They reach for the two lily flowers afloat in mid- sea,
And clutch for safety at your lotus feet most earnestly.

Merciful Lord, grant the poor refugees your gaze to save;
You’re so fearless, all powerful, grave, strong and brave.
If unsuckled by his mother, what’s a babe’s sad fate?
Where’s safety for sheep when their good shepherd’s irate?
Where’s help for the soul pitched against God’s mighty wrath?
How will ignorant ones conquer mind, as flame is to moth?

Master! Why not save the devotees pining at your feet?
Perfect peace spreads when you shower nectar so sweet,
By the lucid lunar-like smile that shines on your face,
Your steady gazing eyes grant incomparable grace,
Oh Lord, your pearl of silence is a gift of priceless worth,
It’s unparalleled , oh Bhagavan, on this poor planet Earth.

The light of Parvati shines through your penetrating eyes,
Dispelling ignorant darkness that clouds the mind’s skies.
Your face gleams with the grace and brilliance of Lakshmi,
Your words contain the secretive lore of Goddess Saraswati,
Preceptor of the worlds, Sri Bhagavan Ramana the Great,
How can mere mortals praise the glory of your Realised state?

Good fortune visited the Red Mountain Arunachala,
For having sheltered Great Sages in the past, oh Ramana,
But now has grown unique because you’ve chosen this hill,
Among many sacred places, there for your mission to fulfil.
Boundless bliss has flooded the Heart of BEAUTEOUS Mother Earth,
A Sage came as Ramana to save us, he took a human birth!

*A free versification of the English prose translation from  the Sanskrit,
of ‘The Forty Verses in Praise of Sri Ramana by Ganapati Muni’.