My father was a professor of mathematics.

Ever since I was a child, I remember my father reading palms for fun and entertainment. He read palms on demand and instantaneously!

No was ever refused. Someone could come to him off the street and ask to have their palm read. My father would stop immediately, hold the persons hands and look at all the lines on both palms and give his reading.

My father was always positive about what he said and was careful to couch anything negative by emphasizing the power of prayer and the role of will power. His readings were optimistic and he was very enthusiastic about communicating how destiny could be overcome by hard work and sincerely praying to God for help.

My father motivated people. He told them to not focus on their weaknesses and worry, but to enhance their strengths through mantra meditation and prayer.

Anyone who came to our house would have both their palms carefully examined and told about their future and given advice as well to overcome any obstacles!

The picture given above is of my father from the early 1970s. I was serving as his assistant and helping out managing the lines of people who wanted their palms read.

Whenever my father read palms, great crowds would gather.

No one was ever charged. All the readings were completely free. 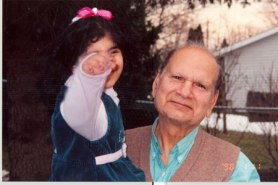 Yesterday was the fourth anniversary of my father Rajindar S. Luthar passing away. I think about him often. He was my guide and counselor.

Like me, my father was a professor. His area was mathematics which he loved teaching. He was also a scholar and enjoyed publishing. He founded a Math Journal called Delta which eventually merged with another journal. He was an excellent cook and enjoyed entertaining at parties. He was truly multidimensional in his views and approach to life. We talked about everything. Politics, food, men and women, money, religion, gurus, relationships, marriage, sex. No topic was off bounds.

My father was not much into visiting temples or holy places but was a staunch Hindu and exemplified all that is best and noble in Hinduism. He often had dreams of various saints, rishis, munis, and gurus and loved to describe them in minute detail to me. He told me that he dreamt about Jesus Christ as well. I asked him how he knew it was Jesus.

Throughout his life, my father was very psychic. One time when he was in America, he dreamt that someone very close to him was being electrocuted. He immediately woke up and started praying. The person in the dream was my younger four-year-old brother who had been caught in live electric wires when we (our cousins and us) were playing on the roof of my uncle’s shop in India.

That was back in 1964. From 10,000 miles away, my father had dreamt that someone he loved was in trouble and acted to send his protection and prayers. My brother was very badly burned all over his skin but miraculously survived. He gradually recovered fully and the burn marks on his body eventually disappeared.

Although he was a mathematics professor, my father enjoyed talking about philosophy and religion. He was tolerant and liberal and accepting of all people but at the same time full of humor; sometimes irreverent humor, about religion and gurus. He told me many stories about fake gurus in India. “All these gurus, pretending to be so holy and pious; they love women, sex, and money!” He would say and then have a hearty laugh.

Because I was interested in all those things having to do with yoga and meditation, my father often cautioned me about gurus when I was a teenager and suggested that I be very careful. “Many gurus even like young boys!” he said to me many times in warning. My father left no stone unturned doing his best to make me aware of the realities of life when I was young. Sometimes I thought he was way too overprotective and controlling.

Now, I remember my father as kind and generous with smiling eyes. At times, he had a huge all consuming laughter that drew others in. I miss him every day.

My father was my protector and best friend. I wrote the following in 1996 when my Father turned 70 as a dedication to him. The picture is of him at 72 holding my daughter. It was taken in the summer of 1998.

The last wonderful summer my father and I spent together was in 2003. Several months later in November of 2003 he fell ill. After that I was only able to see him at the hospital. My father passed away in early 2004 at the age of 78. I think of him everyday.

A Dedication to My Father on His 70th Birthday in 1996

My father was a mathematics professor. He is now retired. I saw him spend countless hours writing papers and constructing new math problems. He involved the whole family in helping him with an undergraduate math journal, Delta, that he had founded, and of which he was both the editor and the publisher. It was too much work for one man, but my father persisted in doing the impossible for years. Delta later merged with the Mathematics Magazine issued by the Mathematics Association of America. We were all happy when that happened!

My father spent a lot of his evenings grading math exams. This used to irritate my mother. “Must you spend so much time reading student exams? Give them a grade and get it over with,” she would say. He usually replied, “What do you think I teach, sociology or philosophy? Can I just read the first and the last line and give a grade!” Then he would laugh heartily feeling he had uttered a profound truth.

My father actually loves the humanities but is of the opinion that everyone should have concrete skills to earn a living. He never hesitated to express his views to me and others about education. Once, in order to demonstrate the superiority of learning math over other disciplines he said to his colleague who taught astronomy the following: “If our students know math and statistics they can get a job at the plant (he was referring to the local GM Plant). If they take astronomy and don’t get a job what will they do? How will they eat? Maybe they can go to your house and you can all watch the stars together on an empty stomach!” My father thought what he had said was quite funny, although the astronomy professor did not. The following poem is dedicated to my father.

who has to differentiate

between precious rubies and stones

who with a heavy heart sings

and then has to part

that must end up on

asks the birds to stay

in the nest he has made

so they can rest in the shade

of the tree of wisdom

standing in the luscious grass

only to see them fly away.

Cool breezes and the

is what we received

that was my father’s heart.

and then slowly fade away

to pictures on the walls

but the touch of ideas

given with humor and kindness

and their smiling eyes

bubbling forever in our mind.

“Well, you both talked for a while and I hope it helped,” I said.

My father explained the situation and said, “I don’t know if it helped. We are old friends and he seemed sad and he was reflecting on his life as we talked. He kept saying throughout the conversation that although he had had many friends in his life and had been married and had children and a family, he never really received genuine love from anyone.”

Hearing about my father’s friend, I also became silent. This is the human condition, is it not? We all know the truth of it. We want attention and love but often do not receive it. Many people, as they get older, embittered by their life experiences become sad and cynical.

My father went into the kitchen and started eating lunch. I prepared another cup of Chai and sat down with him. “What did you say to your friend,” I asked my father.

“I did not say much. We just talked,” said my father.

“No, I mean when your friend said that he had never really gotten love from anyone, what did you say? How did you console him?” I asked my father.

My father said, “I told him I loved him.”

“What did he say in response.” I was very curious.

“He said, he knew that. That’s why he called. We are childhood friends. But he still insisted that he really had not gotten the kind of love he wanted from anyone during his whole life,” said my father.

“What did you say then?” I asked being fully engrossed in the scenario.