Sri Ramana used to say that of all the yogic rules and regulations, the best one is taking of Sattvic foods in moderate quantities. This view is consistent with that expressed in the Bhagavad Gita, and indeed most of the Yoga Shastras.

The logic is that since food consumed has a major effect on the body and the mind, a Sattvic diet should be adhered to in order to enhance both the health of the body as well as purity, strength, and calmness of the mind. An agitated person will find it difficult to sit quietly and meditate.

A disciplined and one pointed mind is an aid to ones’ learning and education as well as having success in business and other worldly affairs. A clear, pure, and a reflective mind is, of course, essential to self-enquiry which leads to Self-Realization.

The question then becomes, “What is a Sattvic diet? What is the authority for saying that certain foods are Sattvic and lead to good health, mental clarity, poise, and spiritual advancement, while other foods do not?”

There is much yogic literature on this topic and also some disagreement among experts depending on their school of thought and background. Since most Hindus generally accept the Bhagavad Gita as the final word, I will refer to that as my primary source on the Sattvic diet.

We should keep in mind that Sri Krishna, who speaks in the Bhagavad Gita with complete spiritual authority, is also considered the model of exceptional and abundant physical health and perfect mental poise. He is depicted in the ancient writings as slim, active, energetic, graceful, and attractive.

What foods should one minimize according to the Bhagavad Gita?

In Chapter 17 (verses 8, 9, 10), Sri Krishna makes clear the type of foods to be avoided by those who seek good physical and mental health, worldly success, and progress on the spiritual path.

According to the Bhagavad Gita, foods which are too bitter, sour, salty, pungent, dry, and hot can lead to pain, distress, and disease of the body. Further, Sri Krishna says that foods cooked more than three hours before being eaten, foods which are tasteless, stale, putrid, decomposed and unclean should be avoided by spiritual aspirants and those who seek excellent physical and mental health.

What foods should be eaten according to the Bhagavad Gita?

In Bhagavad Gita, Sri Krishna states, “If one offers Me with love and devotion a leaf, a flower, fruit, or water, I will accept it:” (Bg.9.26). To me this seems to suggest that Sri Krishna is sanctioning a diet based on leaves and fruits and water as the best one for spiritual growth. I am no scholar on the Bhagavad Gita, but my liberal interpretation of this verse would be that the Sattvic diet is generally plant based and includes all or most vegetables, fruits, legumes, grains, nuts, seeds, etc.

Because Sri Krishna gave cows sacred status similar to that of a human mother and favored raw butter for personal consumption as a child, one could reasonably argue that dairy products (such as yogurt, milk, kefir, lassi, sour cream, etc.) belong to the Sattvic food category.

Many yogis hold the view, however, that dairy products can only be considered Sattvic if these are obtained respecting the cows and goats who are shown kindness, love, and humane treatment. According to the principle of Ahimsa (nonviolence), any food procured through violence to living beings cannot be considered Sattvic.

Some yogis that I have met favor a completely raw vegetarian diet with a primary focus on sprouted grains and beans (such as Garbanzo, Blackeyed peas, etc.) along with raw fruits and vegetables. Their diet is essentially vegan and contains no animal products. However, modern science teaches us that since vitamin B12 is missing from a purely vegan diet, supplementation is necessary.

A number of medical and scholarly references can be found on this issue on the web.

Other yogis have felt that a raw vegetarian diet is too limiting and include cooked foods as well as dairy products (milk, yogurt, lassi, etc.) in their diet. This diet, known as the lacto-vegetarian diet, is probably the most wide spread among Indian Hindus and Jains.

A few well known yogis have also traditionally included not only dairy but also eggs and egg products in their otherwise vegetarian diet. This is known as the lacto-ovo vegetarian diet.

Although very few Indian yogis include any kind of fish, fowl, or meat in their food, there are exceptions. Buddhist yogis, for example Dalai Lama, do eat meat. A few Hindu yogis also eat meat pointing out that some ancient scriptures sanction meat eating for certain religious rituals.

For most Hindu and Jain yogis, however, there is no convincing argument for eating meat if one wishes to uphold the supreme principle of Ahimsa and follow the philosophy of nonviolence.

What is the best Sattvic Diet?

The general answer from my study is that foods which cause the body to gain health and for the mind to be calm and peaceful constitute the Sattvic diet. To some extent, this requires knowing the needs of one’s own body and being sensitive to the effects of various foods on our system. Foods which are very suitable and nutritious for one person may not be right for another. Common sense and wisdom are the essential ingredients to find the best Sattvic diet for yourself.

In terms of particular foods to be eaten, the yogis and sages have answered this question, but the answers have different variations. One common element of a yogic Sattvic diet is that it is primarily vegetarian. This is true at least for Hindu and Jain yogis.

Having experimented with a variety of diets for decades, I feel that a vegetarian diet can be healthy or unhealthy depending on many factors. For example, if I am a lacto-vegetarian and eat too many pizza pieces, the feeling of discomfort is likely to follow. In fact, after experimenting with eating pizzas thousands of times in my younger days, I am fairly certain that this is indeed true. I believe this also holds if one eats bucket loads of ice cream on a frequent basis. So, is lacto-vegetarian diet healthy? It depends on how lacto you are and how often you go lacto with heavy fat and fried lacto foods!

The point is that a vegetarian diet can be either healthy or unhealthy depending on the nature of food eaten as well as the quantity of food consumed.

In Chapter 6, verse 16, Sri Krishna specifically emphasizes moderation in eating and sleeping. He states, “There is no possibility of ones’ becoming a yogi, O Arjuna, if one eats too much, or eats too little, sleeps too much or does not sleep enough.”

Clearly, overconsumption of food leads to problems and one can logically conclude that the quantity of food consumed is probably an important element in a diet being considered Sattvic.

Sattvic diet is also a matter of degree. Some diets may be very Sattvic, while others may be moderately Sattvic.

Finally, the thoughts and the emotional balance while eating the food have an effect on our system. This is why in many religions, prayers and showing of gratitude for the food being consumed is offered. This mental state while eating helps the diet become more Sattvic.

What does it all mean?

So what does it all mean and what are the lessons from Bhagavad Gita and our discussion of the Sattvic diet? Here is what I think some of the lessons are. See if you agree.

1. Whatsoever you eat, eat in moderation.

2. Educate yourself on proper nutrition, be sensitive to your body, and see what foods work for you.

3. Emphasize fresh vegetables and fruits and eat a diet which is mostly plant-based.

4. Do not eat foods which are too salty, bitter, or have gone stale and putrid.

5. Regardless of the food being eaten, eat with gratitude, prayerful attitude, and with mental poise.

6. Chew the food carefully and taste it deeply without rushing.

There are literally thousands of great sources on the web and hundreds of books in stores to help you educate yourself on the Bhagavad Gita, vegetarianism, and nutrition. Go do some research and find out for yourself!

That’s my homespun wisdom for today. Like Captain Planet used to say, “The Power is yours!”

Given below are some pictures of plant based dishes that I made keeping the principles of Sattvic food in mind. Wishing you all abundant physical, mental, and spiritual health. Namaste. 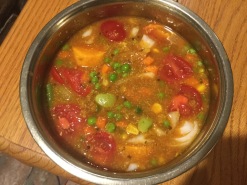 35 thoughts on “Bhagavad Gita and the Sattvic Diet: By Dr. Harsh K. Luthar”