Love Is Not Something You Get: By Dr. Harsh K. Luthar

“Well, you both talked for a while and I hope it helped,” I said.

My father explained the situation and said, “I don’t know if it helped. We are old friends and he seemed sad and he was reflecting on his life as we talked. He kept saying throughout the conversation that although he had had many friends in his life and had been married and had children and a family, he never really received genuine love from anyone.”

Hearing about my father’s friend, I also became silent. This is the human condition, is it not? We all know the truth of it. We want attention and love but often do not receive it. Many people, as they get older, embittered by their life experiences become sad and cynical.

My father went into the kitchen and started eating lunch. I prepared another cup of Chai and sat down with him. “What did you say to your friend,” I asked my father.

“I did not say much. We just talked,” said my father.

“No, I mean when your friend said that he had never really gotten love from anyone, what did you say? How did you console him?” I asked my father.

My father said, “I told him I loved him.”

“What did he say in response.” I was very curious.

“He said, he knew that. That’s why he called. We are childhood friends. But he still insisted that he really had not gotten the kind of love he wanted from anyone during his whole life,” said my father.

“What did you say then?” I asked being fully engrossed in the scenario. 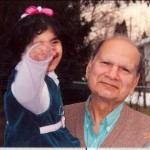 9 thoughts on “Love Is Not Something You Get: By Dr. Harsh K. Luthar”