All Are In The Circle Of Love

The Sage of Arunachala, Sri Ramana Maharshi, gave us the purest teachings.

If we look at the devotees of Sri Ramana, we see that they were some of the greatest yogis and jnanis of their day.

Many of them were world class poets and scholars. But they led quiet, unpretentious, and humble lives fully content in the grace of Bhagavan Ramana.

In outward appearance, Sri Ramana appeared as an ordinary sadhu sitting quietly on the rocks of Arunachala, and wandering the holy hill at times.

The yogis of the highest wisdom upon meeting him recognized him instantly as the king of yogis, serene and content, whose very presence was the blessing they had been seeking.

The message of Sri Ramana is simple and echoes the Upanishads.

It is to turn the mind within to see our true nature. Once we recognize that we are not the body but the Spirit, we will see everything to be full of spirit.  It is the Universal Self that has manifested as all that we see and perceive and sense.

In his life, Bhagavan exemplified his realization and manifested immense compassion for all beings. Bhagavan related to plants, trees, birds, animals, and people as sacred and treated everyone who came within his orbit with the utmost respect and love.

When everything is animated by the same Self, the same Self that we are, no one can be outside the orbit of our love. 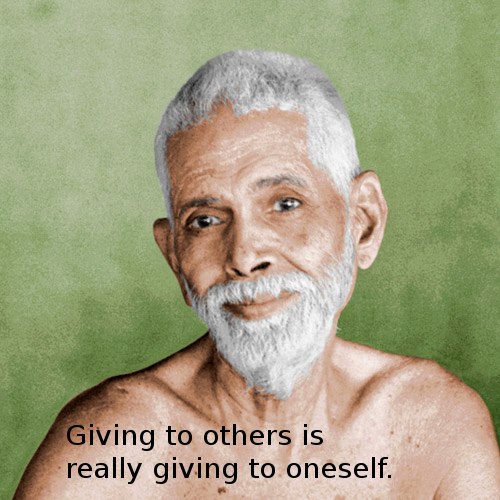 3 thoughts on “All Are In The Circle Of Love”