To those who worship Me alone, thinking of no other,
of those ever united, I secure what is not already possessed
and preserve what they already possess. (BG 9.22)

The story below appeared months ago prompting some discussion in the Guruvayur yahoo group in which I am a member. Today is Thanksgiving here in America, and this week we also celebrate Gita Jayanti, or the observance of the gifting of the Bhagavad Gita to the world by Shri Krishna more than five thousand years ago.  As my thoughts turn to gratitude, I am reminded of this story below and the responses it produced in the Guruvayur group, and how important it is to always be grateful to the Lord for everything, knowing that He is our eternal well wisher and that everything happens for our highest good, even the things which which appear to be bad or are difficult to endure…everything means everything.

The focus of the discussion was on what should we ask of God. To what end do we pray, asking for this and pleading for that?  Success in this venture, a new job, a happy marriage, a grandchild, a son or a daughter, a husband, a wife, a handsome husband, a beautiful wife, a nice house, a beautiful house, a mansion, good grades in school, a child who is a doctor or the president of the US?  For what is it that we really seek, when all illusions are cast aside and maya’s veil is lifted?  None of the above!!!

What should I seek from the Lord but the Lord Himself? That by His grace, I should know Him as the very Self in my heart, casting aside the shackles of the body and the solitary confinement imposed by the mind. He promises us, in the Gita, that if we are utterly devoted to Him, thinking of Him only, asking only for Him rather than of Him, He will be ours, and as such, will take care of us as needed.  To understand this, to believe this, in full faith, can only be followed by complete surrender to His will, trusting that whatever happens is indeed His divine will operating to bring us out of bondage to birth and into reunion with Him.

What should we ask of God?

This story from Mahabharata answers this question beautifully and categorically:

The Great War between the Pandavas and Kauravas was to begin. Arjuna, having pondered, decided to

go to Lord Krishna and ask him for help.
He went to the Lord’s abode and found him asleep.

He stood respectfully at his lotus feet, with folded hands and head bowed in reverence. Duryodana, of the Kauravas, had the same idea of asking Sri Krishna’s help. He too came and, finding the Lord asleep, sat arrogantly in a chair placed at the head of Lord’s bed.

In due course, the Lord woke up. Arjuna, being at his feet, was the first person he naturally saw. As he turned to get up, the Lord’s eyes fell upon Duryodana.

The purpose of their visit was known to Him. However, he asked them what he could do for them.

Both answered that they had come to request his assistance in the ensuing war. The lord said that they had placed him in a difficult predicament by asking for the same thing. He said he could not deny either of them. He said he would offer himself, alone, without armies to one of them and to the other he would offer all his armed forces completely. He said that since his eyes had fallen on Arjuna first, he should have the first choice in the matter.

Arjuna promptly prayed to Sri Krishna that he alone should side the Pandavas.. Duryodana heaved a sigh of relief and requested Sri Krishna for all his forces. The Lord agreed to their requests.

We know who emerged victorious. The moral is “We should ask for HIM, not ask for things He can give us”

If the Lord gives us everything in the Universe but withholds Himself from us, we gain nothing. But if we seek HIM for Himself alone, we get not merely Him but all that is His, too!

Meaning:
He who with his mind disciplined through Yoga in the form of practice of meditation and thinking of nothing else, is constantly engaged in contemplation of God attains the supremely effulgent Divine Purusha (God)  (sloka 8 in chapter 8 of Gita)

And what did Arjuna request?  The Lord Himself.  In his earnest bhakti, he intuited that this was the right choice and it was.  When you ask for the Lord Himself, with utter devotion and humility, how can He deny you?  In the Gita, He makes this promise to His devotees…

To those who worship Me alone, thinking of no other, of those ever united, I secure what is not already possessed and preserve what they already possess.
https://luthar2.files.wordpress.com/2009/06/bgita.pdf

But those who always worship Me with exclusive devotion, meditating on My transcendental form—to them I carry what they lack, and I preserve what they have.
http://www.bhagavad-gita.us/categories/The-Gita%3A-Chapter-9/?Page=2

Those who desire My eternal association precluding all else meditate on me with exclusive devotion; those persons I insure the uniting of their individual consciousness with Ultimate Consciousness perpetually.  http://www.bhagavad-gita.org/Gita/verse-09-22.html

Yoga-kesamam, means to provide what they lack and safeguard or preserve what they have. In this context, yoga is said to mean making available what one does not have, and ksema means the preservation of what one already has.  For some, the sloka is interpreted to mean those who recognize the nonduality of the Self, abiding in the Self at all times; for others, this is considered to be a promise from the Lord to take care of His devotees. If we go online, we can find countless articles claiming that the interpretation therein is the right one and that all others are missing the point, thus missing salvation itself!

For me, neither one has the right to claim the other is wrong…it can mean both, one at the level at which we exist as entities in this world of maya, or saguna,  another at the level of the formless nirguna.  The Lord, in His infinite mercy, prescribed numerous paths in the Gita. I am a bhakta. He is my Lord and while I know that philosophically speaking we are indeed nonseparate as it says so in the Gita and in the Vedas, as far as I am concerned, that can only be truly perceived through His Grace.  So, while I am nothing but Him, on another level of worldly perception, this is known and experienced only through the operation of Divine Grace.

It is so stated in the Mukanda Upanishad 3.2.3:

This Self cannot be realized by studying the scriptures, nor through the use of reason, nor from the words of others–no matter what they say. By the grace of the Self the Self is known; the Self reveals itself.   http://www.peterrussell.com/Upi/Mund.php

The Supreme Lord is not attained by reasonings or by vast intelligence, nor even by much hearing. He is attained only by one whom he Himself chooses. To such a person He manifests His own form.  http://bvml.org/SBVPGM/sgt.html

The Self cannot be known through study of the scriptures, nor through the intellect, nor through hearing learned discourses. The Self can be attained only by those Whom the Self chooses. Verily unto them Does the Self reveal himself.  http://booksandphotos.blogspot.com/2009/05/upanishads-kena-and-katha.html

This Supreme Self cannot be reached by argumentation, or by applying one’s independent brain power, or by studying many scriptures. Rather, he alone can achieve the Self whom the Self chooses to favor. To that person the Self reveals His own true, personal form.  http://vedabase.net/sb/10/87/27/en1

The reason I have reproduced more than one translation of the Gita and Upanishad slokas above is that I wanted to read them in several formats for my own benefit and I also wanted to offer the reader the option of seeing it as such. So many ways of saying the same thing.  And so many schools of thought want to say that their interpretation is the correct one and all others false and faulty.  In the end, Divine Grace is the operational catalyst, whatever you deem its source.

So, what should we ask of God? Truly, there is no thing to be asked. There is no thing to be given. How can we give Him what is already His? All we can do is realize, through His grace alone, that we are already His, in every sense that we as mortals can conceptualize in our limited minds! Not only will He take care of everything and look after the welfare of the devotee, He will guide us if we listen. Thus, I do have a prayer…to fully surrender, to listen without fear of the consequences, no matter what He asks me to do. Where it will lead, I have no real idea and no plan of action! He is guiding the chariot now. May I sit quietly and not be a backseat driver. Chitta chora!!! 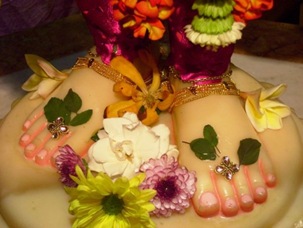