We Did Not Go To Him For Profit: By T.K. Sundaresa Iyer

Note: T.K. Sundaresa Iyer (T.K.S) met Sri Ramana in 1908 when T.K.S was only a twelve year old boy. Bhagavan, although a full blown Self-Realized sage, was also quite young and in his late 20’s. Many early devotees have described how Bhagavan by his sheer look would give them experience of the Self. However, this was not true in every case.

T.K.S’s cousin Krishnamurthy had been visiting Bhagavan Ramana  regularly and would sing songs of devotion to him. One day T.K.S asked his cousin where he went every day. Krishnamurthy told him about Ramana and said, “The Lord of the Hill Himself is sitting in human form, why don’t you come with me.” Both of them then climbed the Hill and went to Virupksha cave to visit the Sage.

I too climbed the Hill and found Bhagavan sitting on a stone slab, with about 10 devotees around him. Each would sing a song. Bhagavan turned to me and asked, “Well, won’t you sing a song also.” One of Sundramurthy’s songs came to my mind and I sang it. It’s meaning was, “No other support have I, except thy holy feet. By holding on to them, I shall win your grace. Great men sing your praise Oh, Lord. Grant that my tongue may repeat Thy name even when my mind strays.”

“Yes. That is what must be done,” said Bhagavan, and I took it to be his teaching for me. From that time on, I went to see him regularly for several years without missing a day.

One day I wondered why I was visiting him at all. What was the use? There seemed to be no inner advancement. Going up the hill was meaningless toil. I decided to end my visits on the hill.

For one hundred days exactly I did not see Bhagavan. On the hundred and first day I could suffer no longer and I ran to Skandasramam, above Virupaksha Cave. Bhagavan saw me climbing, got up and came forward to meet me. When I fell at his feet, I could not restrain myself and burst into tears. I clung to them and would not get up.

Bhagavan pulled me up and asked: “It is over three months since I saw you. Where were you?” I told him how I thought that seeing him was of no use. “All right,” he said, “maybe it is of no use, so what? You felt the loss, did you not?”

Then I understood that we did not go to him for profit, but because away from him there was no life for us.

From “At the Feet of Bhagwan” by T.K. Sundaresa Iyer. 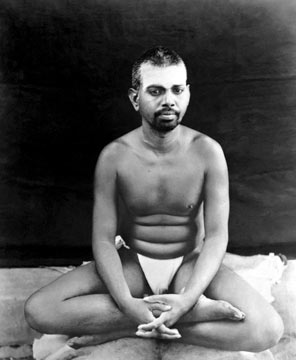 5 thoughts on “We Did Not Go To Him For Profit: By T.K. Sundaresa Iyer”