In the 1960s, my Gurudev, Sri Chitrabhanu- Ji, wrote a poem called “Matiri Bhavanu” on friendship and universal love in his native tongue (Gujrati) that became famous in India. It was eventually recorded as a song by a well known Indian singer named Mukesh and was set to music by an eminent Indian composer. The poem was translated into English by Gurudev Chitrabhanu- Ji and that is the version of the poem that I was most familiar with. However, at the meditation center where Gurudev taught and lectured in the 1970s, we sometimes sang the poem Maitri Bhavanu in Gujrati with great feeling.

The scene shifts now to almost 30 years later to 1994. In 1994, the thought came to me that I should read the original Gujrati version of the poem by my teacher. Gujrati is not my native tongue and, in fact, I do not understand it at all. I cannot speak in Gujrati and cannot read it. However, the Gujrati alphabets are similar to Hindi which I do know. So somehow the feeling came over me and I started to try to read and understand my teacher’s poem. It was hard but I was staring at the Gujrati words as if through will power alone I could decipher them. After some difficulty, I switched to the English description of the Gujrati sounds that you can see on the Jain Meditation Center website.

After many attempts, I actually started to understand the first stanza, and then the second, and then the third, and then the fourth. It was so beautiful and full of the universal feeling that I went into ecstasy. The result was the following poem, “Let this feeling never part!” In a very real sense this poem is the spiritual offspring of that original poem written by my teacher in his youth as a Jain monk. Recently, I came across the poem again on my old computer files and had to smile. I was just a “kid” when I wrote it. Of course, it cannot reach the same level of poetic artistry as my teacher’s poem in original Gujrati which is a true masterpiece. But I tried because something came over me. Perhaps what I lacked in talent, I was trying to make up in enthusiasm and feeling. I dedicate this poem to my Gurudev, Sri Chitrabhanu-Ji, who taught me the meaning of Ahimsa, the philosophy of nonviolence.

The sacred stream of love divine
sweeter than the sweetest wine
flowing into this vast sunshine
springs eternal from my heart.

I pray no one should be left out
from life’s blessings in their glory
and give way to tortured doubt
with unhappy endings to their story.

Never should they be turned away
suffering from the blows of life
the poor, the wretched of this world
caught helplessly in endless strife.

If ever anyone should be in need
of comfort or help in getting up
let me not run away from them
but plant kindness as my living seed.

Let me give hope where there is despair
and mend hearts considered beyond repair
like the gentle ocean breeze that
heals all wounds and gives a fresh start
Let this feeling never part!

I should always find delight
in the warmth of universal light
but if my heart must bleed at all
let it be so in the dark of night.

No one should see the tears that come
when the wicked and cruel come in my sight
let this hand forever be raised in peace
and the violence around us come to cease.

Always this thought should be kept alive
every sinner is a future saint
there should be a place for everyone
to swim in the pouring love divine
that flows eternal from my heart
Let this feeling never part!

Unaware, if someone is unkind
let forgiveness be on my mind
until no trace is left behind
of ill will, anger, or hostility.

If I should ever slip and fall
and no one to catch me is around
let me come down gently like a leaf
so other life is unhurt on the ground.

If I have to lay for some time
contented should be my smile
composing songs of love and friendship
and resting all the while.

I will be picked up by love divine
which springs eternal in my heart
for all the beings everywhere
Let this feeling never part!

Sages have sung the song of friendship
walking with them and in their shoes
the same melody plays on my lips
the feeling of reverence for life continues.

Involuntary poets, there have been many
who felt the thrill and saw the sign
whose hearts sang out in ecstasy
as their fountain bubbled with love divine.

The blessings of nature are bestowed
on those who are firm in their belief
who are harmless to others and easily bow
before anyone, seeing only divinity.

If I should be granted just one thing
let it be the vision of love
always rising from the spring
sacred and eternal in my heart
Let this feeling never part!

I bow to the light in you
which is the same light in me.

Once there was this mystery
set in the dense fog of life
nothing appeared clearly
and thorn bushes on all sides.
Being tired I stopped along the road
and lay down to rest my back a while
a pure spring gushed forth suddenly
flooded the ground and made me smile.

Too many body aches to move
how with miseries we are wed
as hopes played their endless melodies
a welcome stillness led
once more to a forgotten place.
For naked lovers with no rent to give
earth serves as the final bed
and peaceful sleep comes easily
to a tired, worn out heart.

That day upon awakening
even the air was wet
but no ceilings now
to keep out the light.
The building puddles
might have drowned me still
but I had had my fill
of sights and wonders
or so I thought when
by chance our eyes met.

A perfect face of such radiance
who can resist this innocence
and having given up everything,
it made no sense at all
to hold back just my heart.
The pull, this magic pull,
on my decaying orbit,
takes away the choice
of ever being untrue.

What voice can speak now
and say I loved
and lost myself in you
and then saw that You were Me.
Silence stole us from ourselves
for all Eternity.

I splashed all about
trying to get out
out of the well of love.

Terror seized me
came this thought;
All is lost!

Tried to swim out
heard myself shout
Help!

I wildly thrashed around
in the well of love
and in time got out
safe and sound.

Cold and shaken
lost in thought
dripping from head to toe;
was not sure
if the battle fought
had been with a friend or foe.

Still, shivering body
sought no shelter
with no other place to go
stood quietly into the night
until the sunrise
brought its warmth and glow.

Then I missed love
and circled
the well of love.

Looked inside
but could not tell
how deep it was.

I felt its call
the well of love
thus grew my sorrow and pain.

I could not help it
so I jumped in
the well of love again.

Now, water water everywhere
all thought has ceased to be
and everywhere I stare
my love’s face is what I see.

Yes, water water everywhere
not a single sound is made
I did drown in the well of love
and only love remained. 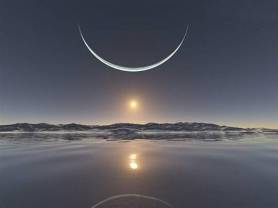 No Night in the Season of Love

“I Was Ready To Tell” by Rumi