My name is Lakshyan Schanzer. I have been practicing and teaching yoga and meditation since 1971. I am also a psychologist and practice a meditative approach to psychotherapy. This is my first writing about my experiences with Nisargadatta Maharaj.

By 1978 I had been practicing and teaching for about 7 years (primarily Integral Yoga) and had reached a ‘wall’ in my practice. I was having wonderful experiences/results on a daily basis. Yet, for me, these experiences were just that; only experiences. Yes, they were important and healing ones, bringing revelations and insights into my history, release of deep feelings, or guidance about the coming day or accurate premonitions about the future.

However, as I became accustomed to ‘pushing the buttons’ that generated these experiences, I began to ask myself: “Was there any value beyond these temporary conditioning effects of regular practice? That is, if we experience ourselves as the product of conditioning, and if practice is just to create a ‘sattvic’ body-mind condition, does cultivating one condition over another give any real freedom?

In spite of my pessimistic reasoning, of course I continued my practice. Obviously it is better to condition yourself to have positive life experiences rather than to have negative ones. Yet, because of my sense of truth or maybe because of a scientific bent, I really wasn’t satisfied in thinking that the result of practice was just a kind of conditioning. 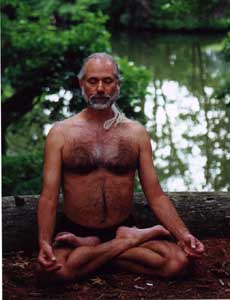 I focused heavily on these kinds of thoughts: Was I just ‘luckier’ than someone who didn’t practice? What if my conditions changed so that I couldn’t keep up this sadhana practice (i.e. if my health or means of survival changed)? How would my sattvic state really be any different than anyone else’s non-sattvic suffering? I began to ask my teachers these questions, inquiring if something was lacking in my practice. Most really didn’t understand my problem. At best, the answer was: “Just practice more.”

I believe it was this kind of self-examination that led me to Maharaj.

I had already begun a career in integrating meditative practice with the world of mental health and health psychology. Interested in continuing my studies (especially regarding the integration of yoga into health care settings) and hoping to take these questions to some known or unknown guru, I planned a trip to India for December 1978.

I arranged to visit various centers, ashrams, even hospitals, and of course, gurus. I did not know that Nisargadatta even existed, let alone that I would be directed to see him. Yet, within two days of my arrival in Bombay one of the head monks (I think his name was Pierre) in Swami Muktananada’s ashram said: “Since my guru isn’t here right now, you really should meet a fully enlightened master. Here is his address”.

What follows are some of my first impressions of my first meeting with Maharaj that I kept as notes during the trip:

The taxi driver was having trouble locating the address. Maharaj’s apartment was located at Ketwadi Street, a humble residential area, not far from the prostitute district. Neighbors could not tell where to find this Jnani Yogi, even though he had been residing and teaching there for many years. Finally after finding it, one of Maharaj’s devotees spotted the taxi and was directing people upstairs to a tiny (maybe 12 x 12 ft) room. There were about ten people already sitting with a wiry little old man. Maharaj inspected each person as they ascended the loft where he gave satsangh.

As I sat down, I felt a tremendous pressure of feeling around my heart. I felt like crying. I decided I would just sit there and stay with this feeling.

Maharaj sat there in dialogue with Mularpattan, a translator.

It was an open and lively discussion with Maharaj responding to questions by the group.

The topic was about how the mind can be made to remain unidentified with perception. The subject and discussion was so in tune with my own thinking and my struggle to understand the effects of practice. I was right at home. And in spite of my decision to sit still and reflect, I found myself just jumping in, asking questions.

Sitting with Maharaj was a riot! There was so much fun and mirth in his manner of expression, and the response of the group. I was captivated by the energy around him. 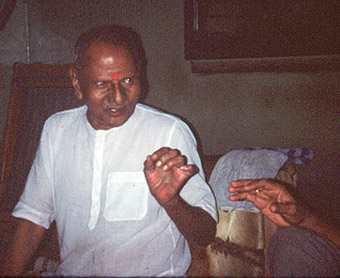 At the end of one of the visits Maharaj asked: “How many of you have understood what I have been saying?” A few of us would raise our hands. To those he would say: “Then you need not come back.” Then he announced: “And those of you who have not understood, you also should not come back.”

Finally he asked the question: “and who will be here tomorrow?” Everyone raised their hands!

There was something about the PLACE from which he spoke that was so impressive intellectually and so attractive because of its lucid, frank, and spontaneous manner. I also had read Ramana Maharshi and was drawn to his teachings. My own practice was along these analytic lines. Yet, here was a man who was constantly experiencing it.

Maharaj was the most unpretentious guru I have ever met. He chain-smoked bheedis, Indian cigarettes. 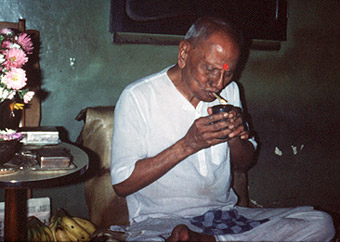 He wore simple and sometimes slightly stained clothes and then would joke about how he was well known for his elegant appearance.

In the mornings each would arrive at the small apartment with offerings of fruit and flowers. I observed Maharaj decorating his altar preparing for meditation and chatting with his wife. He would exit for the bathroom and I could hear his sounds from there… He was completely normal and human in his behavior.

Yet within this appearance of everyday normalcy, was the guru who was answering my questions about practice and conditioning with uncanny precision, even though he did not speak English. Here are some of my findings from near the end of the visits:

1. Body-Mind beingness is not reality, i.e. any subjective experience or thought, or object, is time bound, is changeable and therefore by definition not real.

3. Reality is in the sense of ‘Self’, and That is the reality we seek in the practice of yoga.

This is a more profound grasp of non-attachment than the idea of non-attachment as weaning oneself from desires. That is, subjective experience (perception, thoughts, and feelings) is also a changeable object, and therefore also not reality.

These points might appear as “preaching to the choir”. Yet for me, they were the answer to my concerns about conditioning, and have become the foundation of my approach to yoga. That is, ‘practice’ is not conditioning. Rather than creating a condition of bodymind, practice is the removal of conditioning. Practice is really a restoration, bringing one back the original, prior-to-conditioned sense of self.

My experience with Maharaj was not always serene.

One day a group of disciples of one of the most popular guru’s of the time had come for satsangh. Maharaj took delight in challenging these students. Maharaj boasted how good his talks were: “You’ll never find anyone talking like me!” I also observed him telling other students to “remember me like Lord Krishna” as a part of their practice. Having sat with quite a few gurus, my mind was shaken. Since when does a Jnani tell seekers to worship him? Why this fascination to run down students of other teachers? I left the satsangh feeling disgusted and disturbed.

The next morning I resolved to confront Maharaj. However wonderful I felt about his points on the real and unreal, these doubts needed to be cleared up! I asked Maharaj why he had said these things to the visiting students. Maharaj said: ” What I teach others is not for you to use”. However, Maharaj also picked up on my anger. He said that if I had such questions I should leave. People in the group were shocked.

Yet, something in me clicked. I saw Maharaj modeling being completely non-attached. He was not actually asking me to leave (which I could have, if I were attached to being angry about the perceived hypocrisy). He was modeling not being at the mercy of any subjective state. I thanked him, saying my speaking up was to be able to be silent (i.e. with my silent self). Maharaj paused, seemingly taking it in, and then went right on to the next questioner.

I felt another shift within myself, of letting go and feeling completely in the spontaneous “Now”. My initial excitement of being with this guru was back again and with more force of clarity.

This sense of spontaneity of presence was lasting. I felt I had connected with some sense of source that the man we called Maharaj was operating from. I remember another incident toward the end of my stay with him that illustrates this. At one point Maharaj was prodding people for questions. (He always seemed to want to engage visitors from their sense of self.) He asked a fellow with a beard: “You have a beard. You must be wise. Ask some questions!” Absorbed in the sense of spontaneous source, I found my mouth opening and saying: “The beard grows itself! Wisdom is in that spontaneous being!” Maharaj seized on my comment: “ That’s exactly it! Every event happens this way!

Is that clear? Asks Maharaj

In all, from the beginning of my brief visit with Maharaj I felt validated as a seeker, having found something that was never lost. And for which I have been ever grateful.

Maharaj and the Author Dr. Lakshyan Schanzer in 1978 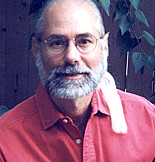 Dr. Lakshyan Schanzer can be reached at: http://www.bodymindri.com or BodyMind Therapies and The Yoga Studio, 84 Melrose Street, Providence, RI 02907, (401) 941-0032. lakshyan@bodymindri.com

Images are taken by the author.