Saturday night was full moon night again, this time special due to the Tamil New Year. Carol and I had not done pradakshina around Arunachala on such nights and had planned to do so this night.

We have been preparing. This is a big effort for aging Westerner bodies. From our house, Brindavanam, it is between 9 and 10 miles to circuit Arunachala. For the last two weeks we had been doing ‘half pradakshinas’ (about 5 miles from our house along the inner path to the Ramakrishna hotel, where we would stop, get breakfast – vadas and dosa, and Indian milk coffee – then take an auto-rickshaw the rest of the way home. To get ready we have been walking about 25 miles a week on Arunachala, either around it or up and down to one or another of the caves and meditation spots.

We joined the pradakshina crowd about 2 miles into the route many take. It is common to start at Arunachaleswara Temple, in the center of Tiruvannamalai. We joined after the route has left Tiru and is starting around Arunachala to the West of town.

Since this was a big night there was a big crowd. We heard crowd estimates of 10 – 15 lakhs (1 to 1.5 million people) – this in a city of about 100,000. When we joined the route the road was packed, maybe 10 or 12 abreast and taking up all the (recently widened) road. To get a sizing of this number of people, in the US there is each year a ‘Super Bowl’ championship of American Football. This gets many 70,000. For European football (soccer in the US) the best teams, like Manchester United gets crowds of maybe 75,000. Lesser teams get maybe 20,000. So the crowd is like 15 or 20 Super Bowls or Manchester United matches.

Visitors commonly take busses here. When they arrive they start the walk. When they are finished, they may eat by the bus then get back on the bus and sleep on the drive back home.

We saw men, women, children, lovers, families, babies asleep being carried over the shoulder and being passed from Dad to Mom along the route. There were small groups of young women walking without parental supervision and human chains of young men, each holding the shoulders of the man in front, pushing their way through the crowd, chanting Siva chants. Many people walked holding hands or in some way staying connected to the people in their group. 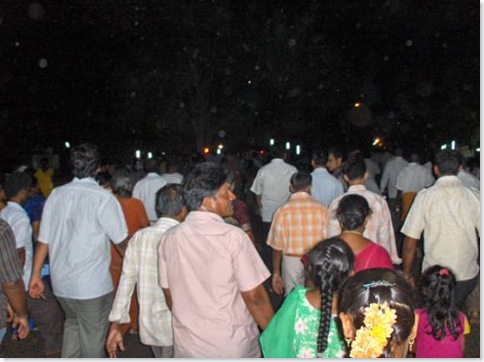 Though we were walking at night, the road was mostly well lit, lit up from all the roadside shops and temple that line the route. Most of the ‘shops’ were temporary, built from poles and erected just for the one day. They supplied everything you can imagine. This included drinking water, green coconuts (for drinking), fruit juice stands, soda stands, food stands, spiritual picture stands, toys, clothes, women’s bags, jewelry (mainly the bracelets that almost all Indian women always wear and color-coordinate with their sarees or salwar suits) food staples like rice and lentils, and many more. I even noticed a motorbike display, showing the latest models. Sometimes it had a bit of the feel of a Western trade show, with all the vendor booths showing off their wares. .

Occasionally there was no light and the crowd was illumined just by the moonlight. I liked this the best.

In the crush of the crowd the walking was not easy. One could not set up a stride and keep it up. People pushed their way past you, crossed the road in front of you, and there was a surprising number of bicycles, motorbikes, and even a few cars and vans going the other way. We were almost hit by an unlighted bike crossing the road against traffic in the dark. Often the most aggressive at pushing their way past us were women.

Here is a photo of a small, simple temple altar to the side of the road after we passed Adi Annamalai. All the others had many people. This just sat a bit away from the road, lit but mainly unvisited. It looked homemade.

I could track our progress by the changing face of Arunachala as we walked. From our walks on the inner path, I now pretty well know were we are by the view presented by the holy hill. We start on the west side and see the view from our house, the mountain, and to the left side, the hill called Parvati. As we walk then we pass Parvati, then the ‘knob’ (whose name I do not know) that I associate with the Adi Annamalai Temple on the backside of the hill. Then we pass the forest to the right that marks the end of the inner path. This means that we are nearing the road back into Tiruvannamalai.

Finally we walk the three miles through town, passing Arunachaleswara, then Ramanasramam. We stopped at a restaurant, Usha’s just before we came to Ramanasramam, to sit and get a bite to eat. I am so tired by now I can barely take the steps, and much of this body hurts, the lower back, hips, legs and feet all hurt, some parts more than others. To keep going I have to think of near term objectives – it is just one block to Ramanasramam, I can make it one more block – like this I was able to make the last couple of miles.

Emerging from Usha’s, now it is about 11 PM. Though late at night, it still must be 90 or 95 F, still surprisingly hot. The crowd we are with is mainly a new group, just starting out. We thought the road was crowded before, but now there seems to be almost twice as many people. The road is packed from side to side with so many people that the pace has slowed to about half of what it was before. At one point, right before Bangalore split off from the pradakshina route, the crowd actually came to a standstill, too many people to even move.

I got up about 4:30 this morning and went up to the rooftop to be with Arunachala and meditate. In our usually quiet country location, there was still much noise from the road. I think a lot of this noise was horns of busses, trying to make their way out, to start back home. And in the dirt road in front of our house, there were, even at 5 AM, many rickshaws (which usually we do not see at all) which were, I guess, carrying walkers too tired to go further, back to their busses.