Satsang with Robert Adams: By Kheyala 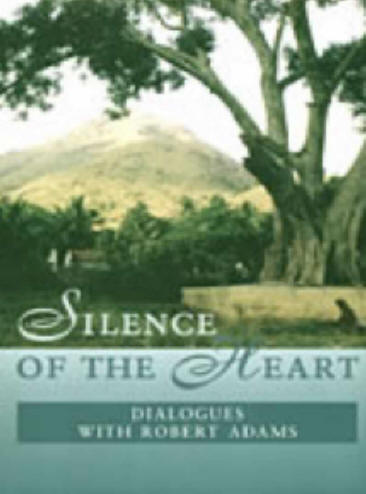 One of the first stops after leaving Colorado that my best friend and I took in our new home-on-wheels (“Lakshmi”) was in Sedona, AZ to go to satsang with Robert Adams. Many of you may know that Robert Adams (whose body died a few years ago) sat before Ramana for years in Tiruvannamalai.

We knew that Robert Adams was aging and that a special opportunity awaited us. Now, keep in mind that my conscious spiritual journey was rather new and I had previously immersed myself in the Satsang Mecca called Boulder.

I had really gotten a feeling for what satsang was “supposed to” look like and went to Robert Adams’ place fully armed with my finest “spiritual” clothing, “spiritual” face, “spiritual” voice, and “spiritual” sitting posture.

When we arrived, spiritually carrying our zaphus behind our hips in silence, heads held humbly down, we were quite surprised to find a room full of relaxed people hanging around, just acting normal. In fact, they were so talkative with each other and easy-going and animated that it made me wonder if we were really at the right house.

I came prepared for silence and holiness and the scene was unsettling being so ordinary. There was nothing spiritual about the place, like decorations or altars or anything that I recall. There may have been a small photo of Ramana. So I sat down and prepared to “meditate.”

Needless to say, I simply couldn’t keep my eyes closed. There was too much fun going on in the room. I struggled with it for a while, but that became so darned uncomfortable. Eventually, I just sat there figuring it would get holy, maybe, after Robert came in.

You can imagine my surprise when he did come in. While I was expecting a spiritual-looking man dressed in Indian garb, what he was actually wearing was a pair of baggy, silky jogging pants and a tee-shirt and he had on a hot pink rumpled-up baseball cap that was on crooked!

Because Robert had Parkinson’s Disease, he kind of made his way across the living room in a slow-motion shuffle and sat himself in the chair reserved for him. Everyone made room for him as he passed by and with great affection touched their palms together in reverence.

Robert sat on the chair for some time. It was real quiet in the room, but not an “it’s-time-to-be-quiet” kind of quiet. It was just naturally quiet. And no one said anything. So, trained as I was to recognize a jnani, well…. no way. This guy was plainly sitting there with his mouth open and his eyes half closed. He was hunched over with his skin just hanging on his face. There was nothing that I could “read.” And boy, did I try. I looked for some kind of radiant glow, some kind of visible wisdom, some hint of Ramana, and nothing! I looked into his eyes and it was as if no one was home. My mind was just struck dumb.

Eventually, Robert jerked his arm up, sort of pointing a finger. That was the cue for the person holding the boombox to hit “play.” I thought, “Oh. THIS must be the holy part.” I closed my eyes in full expectation of sacred words or ethereal music or at least some Sanskrit bhajans. To my utter shock, the thin and twangy voice of Willie Nelson’s “Always on my mind” came singing out!

The whole room went into an uproar. Everyone was laughing and swaying from side to side in enjoyment, singing dramatic crescendos at each chorus: “Telll meeeee. Tell me that your sweet love hasn’t died…etc.”

Robert? He just sat there, expressionless, his body unmoving, hunched in his chair. No sparkling eyes, no nothing. By then, my mouth was dangling open as well. My mind had completely come to a halt. It could not make sense of this at all. It didn’t know and could not begin to interpret what it was seeing.

The next musical selection was Kenny Rogers singing really sentimental love songs. These were no Sanskrit Bhajans about Enlightenment or God or anything. These were love songs riddled with illusion and duality. Rather than condemning them or spiritually correcting them, Robert Adams was just sitting there. Everyone was laughing so hard that tears were coming out. It was so infectious that before I knew it, I was singing along and laughing too. My sides were aching when we were through.

Afterwards, with everyone returning to normal breathing and with some sighs and residual giggles here and there, I had the thought, “Well, maybe now it will get serious.” There was a moment of silence. Then suddenly, someone said, “Hey! How about Mexican?!” This was met by an outburst of cheering! Soon everyone got up and grouped together in cars to go to a local Mexican restaurant.

Bewildered but happy to go along I arrived at a scene that I was dismayed to find rather loud and crowded and chaotic. Shortly after we were seated, I looked over at Robert. He had a bright green margarita in front of him.

Before leaving, I didn’t want to miss the opportunity to speak with Robert even though at the time I sure didn’t know what to make of him….but all that came out was something like, “I like your hat.” And he said something like, “Thanks.”

The sweet, natural happiness that I experienced in his presence was so very thick and blatant. All the ideas I had picked up about what it is to be in the presence of Truth were permanently cracked. The mind just couldn’t get around the chasm between what it thought holiness was supposed to be like and what it had actually met that day with Robert Adams. In its attempt to cross that chasm, it had fallen into it, giving rise to an absolutely undeniable experience of joyfulness and peace.

Editor’s note: Kheyala is a long term member of the HarshaSatsangh list. Her account of the Satsang with Robert Adams first appeared in Spring 2002 of the original HS-Ezine.

4 thoughts on “Satsang with Robert Adams: By Kheyala”