Discriminating between the Real and the Unreal: By Dennis Waite 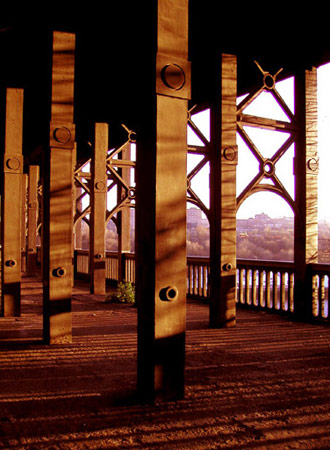 The following is an extract from “The Book of One” by Dennis Waite, to be published Summer 2003 by John Hunt Publishing, O Books.

We know that we “are” and we know that we are “conscious”. Thus we are already aware of the “existence” and “consciousness” aspects of our true nature. It is the “bliss” aspect of which we are still ignorant. Instead of striving to uncover this element of our nature, we spend all of our time in search of various properties of the unreal part of our selves – acquiring unreal objects in an unreal world, adorning our unreal bodies, enhancing our unreal minds and so on. It is as though, in the case of the mistaken rope, we spend all our efforts describing the fangs, imagining how poisonous the snake is and researching into anti-venom serums.

Because we believe that we are the body, we believe we can die. We are constantly insecure. We become obsessed with money, believing it can purchase those things we need to combat our mortality and satisfy our misplaced desires. Because we believe we are limited in so many ways, we are continually trying to get those things that we imagine will remove the perceived limitations. All of our suffering results from this fundamental error that we make. And this will continue until the ignorance that is the cause of adhyasa is removed.

The solution is to remove the ignorance of the Self. Only this can have the required effect – studying any other subject cannot help. The error is in respect of the Self, so the Self must be studied in order to dissolve the ignorance.

If, then, there is only the Self, what can we say about “objects”? In all of our perceptions, we erroneously superimpose Name and Form onto parts of this apparent manifestation and believe them to be separate objects. In fact, we are not seeing the “object” itself but the mental image constructed as a result of impressions from the senses together with our thoughts, ideas and memories further superimposed upon these. Because our nature and nurture will always differ from those of anyone else and the acuity and functionality of our senses will probably differ too, it is certain that what “I” see will be different from what “you” see.

So, is the object out there? The answer depends on how you define the word. There is nothing out there that is separate from the Self but there is something that we have chosen separately to identify by name and form, although you will not see it precisely as I do. How did we reach the conclusion that there was an object in the first place? This is to some degree arbitrary and in accord with social convention, language etc. We choose to call part of the landscape a “hill” even though it is a continuous section with the rest of the land. This is so that, for example, we can suggest building a castle on top of it so that we can see attackers coming from a distance. The reality itself is unknowable. The manifested transient forms are inferred by perceiving their attributes, relating these to memory and giving them a name.

Had I been present at the creation, I would have given some useful hints for the better ordering of the universe. Attributed to Alfonso the Wise, 13th century

All perceptions are appearances only, not “real”. Advaita calls them mithya (mithyA) – literally “incorrectly” or “improperly” – meaning that they are not altogether unreal but not strictly real either. The reality that gives rise to the perceptions is forever beyond our direct knowledge because we must go through the intermediaries of senses and brain. The perceptions are only name and form imposed as a result of adhyasa, by the mind, upon the one reality – the snake upon the rope. Time and space, cause and effect are all concepts of mind created in order to make sense of this imposed pseudo-reality. All these concepts cease when the mind ceases to operate, as in deep sleep. Upon awakening, memory operates and all of the mechanisms of mind, together with all of the learnt concepts we use to make sense of the appearances that strike our senses spring into action. So yes, in a very real sense, we do create our interpretation of what is “out there” each time we awake.

Classical Advaita actually says that, when we see objects, it is not in fact something coming from the objects into our organs of perception, i.e. light, sound etc., it is the other way round. Our senses “go out”, as it were, and “grab” a part of creation, thereby making it into something separate. If there is not a mind and associated sense organs to do this, therefore, there cannot be any objects, only the undifferentiated Self.

To ask whether or not there actually are objects is an interesting intellectual diversion in our present condition but we are in no doubt that, for all practical purposes, they do exist in the vyavaharika realm – our waking “dream”. It is somewhat like asking whether the traffic lights that we are about to drive through, in a dream that we are having, are on red or green. Whilst still in the dream it might mean the difference between life and death. When we wake up, of course, it will not make the slightest difference.
Dennis Waite

Dennis Waite was a member of the UK School of Economic Science until 1998, acting as a tutor for over five years and assisting in the teaching of Sanskrit. He continues to study extensively and is now a full-time writer. He is (occasionally) active on the Advaitin and DirectApproach YahooGroups mailing lists.

See the author’s website at www,advaita.org/uk for more details about the book, together with endorsements and further extracts. There is also a full discussion of the key concept of adhyasa, based on notes by Dr. Kuntimaddi Sadananda on the adhyAsa bhAShya from Shankara’s commentary on the Brahmasutras.) If you want to be informed when the book is available you can email the author at dwaite@advaita.org.uk.

The image was taken by Brian Johnsen in Newcastle, England in 2003.