How Kwan Yin Came To My Wife’s Assistance: By Greg Goode, Ph.D. 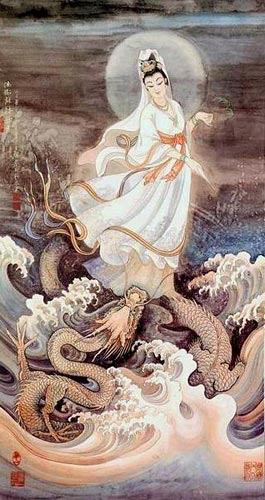 May is my wife — beautiful, kind, humorous, intelligent and wise, graced with a strong and generous character. She’s from Jiangsu, China, and not yet a permanent resident in the U.S. We were married in July.

They took her away in August.

When the U.S. Immigration and Naturalization (INS) comes to incarcerate you, they don’t tell you where you’re going or how long you’ll be there. Being married to a U.S. citizen isn’t enough to keep you out of their clutches. They often don’t let you call a lawyer or family member.

For some reason they did call me after coming to our home and removing her. I was at work. They merely stated that May’s visa had expired, that she was going down to the local office and should be home that evening. But she was sent to the Hudson County Correctional Facility (New Jersey), with INS detainees on the 4th Floor and the felons on the 5th.

Some of her co-detainees had been behind bars for over 18 months and many were shipped directly back to their home countries.

Since the INS doesn’t tell you how long you’ll be there or when your next hearing is, you just wait. And wait. May did have lots of free time, and between bouts of worrying about me and her teenage son, she was able to make collect phone calls (at $5 per minute).

During that month I ran up close to $1000 in phone charges!

May was gone one month. Getting her out before she was deported to China was a combination of persistence, good friends, sound advice, compassionate employers (both May’s employer, and mine), an honest, hard-working lawyer, several hearings with an INS judge, lots of cash – all this and Kwan Yin!

Yes, Kwan Yin, the Buddhist Bodhisattva of Compassion, “She Who Hears the Cries of Sentient Beings.” For the first two weeks, May just worried and lost weight. But at the end of the second week, a new INS arrival brought in some Chinese Buddhist materials.

May took a look at the teachings and prayers, and saw a chant to Kwan Yin. It was a 36-line chant, invoking the name and blessings of Kwan Yin and other Bodhisattvas. The chant was accompanied by a printed form with 1000 checkboxes, to tick off each time you complete the chant. Although May was not a practicing Buddhist at the time, Buddhism had been in the air when she was growing up near Shanghai. So she felt the resonance and took up the chant.

After she’d chanted and ticked off all the checkboxes but didn’t have a photocopier, she just kept on going without the printed form. She began to chant 10, 14, 16, 18 hours each day. When they were let into the yard for their daily exercise and sunlight, she would chant outside.

Not having incense, she would roll napkins into joss sticks and burn them, seated cross-legged in the yard. She chanted more and more and more, until she was chanting virtually the entire time she wasn’t eating or putting in rack time. Several other Chinese ladies began to chant along with her. And for two weeks, there could be heard the soft melodic Chinese chanting of KWAN-YIN-PU-SA (Kwan Yin Bodhisattva). When May was released, her colleagues carried on with the chant. If it worked for her, it could work for them too!

When May returned home, she looked focused, calm, and glad to be out! She said that Kwan Yin had showered blessings upon her and her family.

She said that the chanting had kept her sane and prevented the worry she had felt the first two weeks. Now she continues the chanting and devotions to Kwan Yin. In addition to offerings at our home altar, May goes to the Buddhist temple next door to her work. Each day, she goes to say Thank You, to do an incense offering, and to pray for her family.

I can feel the umbrella of blessings from her practice, and wish the blessings upon all.

May all sentient beings be free of pain and suffering!

Greg GoodeGreg Goode works at a law firm, studied psychology and philosophy at the University of California, University of Cologne (Germany), and University of Rochester. A student of deep inquiry for decades until his search came to a peaceful and blissful conclusion, Greg has written about consciousness, culture, nondualism, psychology, yoga, meditation, Buddhism, and Advaita Vedanta. He is a contributor to the HarshaSatsangh, Nonduality Salon, MahaMudra and Dharma-Direct internet lists, as well as a co-moderator of the Advaitin list. He teaches Advaita and Madhyamika philosophy in New York City, and has a set of web pages on the Nonduality.com website called Presence.

2 thoughts on “How Kwan Yin Came To My Wife’s Assistance: By Greg Goode, Ph.D.”