Seen through the eyes of today’s society, Acupuncture still is a rather vague notion. Quite paradoxical, I dare say, since it is one of the oldest recorded healing modalities. Anyway, the simple awareness of its effectiveness and well-established and well-deserved reputation as one of the main healing modalities in China and other countries won’t help you understand more about it. How about some facts to give you a glimpse of what acupuncture means?

Acupuncture has a known history that goes way back at least 2500 years. Today, we, the acupuncture physicians, use disposable stainless steel needles, while back then stone needles were obviously handier. They were later exchanged for needles made of other exciting kinds of materials, such as bone and bamboo. I think we will stick to the stainless steel needles for now, no pun intended. 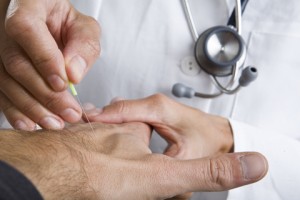 Needles might be a sensitive issue for some of you. To be honest, I’ve never had a strong fear of needles, but the thought of sticking dozens of needles into my body did not appeal to me at all. This until I’ve come to realize that those needles are hair-thin and most of the times you can barely feel them. But above all, the benefits and the relaxation already felt during the treatment needs no further convincing. How bad can it be if many of my patients even fall asleep during the 20 minutes of staying with the needles in?

How come some people fall asleep during the treatment? It seems like there is a decrease in the delta and theta waves activity, resulting in sedation. No wonder acupuncture is so effective against insomnia, anxiety, and addictions.

I can already see another question coming: how does acupuncture work? Well, for some people the empirical evidence spreading over thousands and thousands of years is more than enough. However, if scientific evidence works better for you, I do have a few explanations.

One of the most common objective effects of acupuncture is the pain-relieving effect, which is achieved by raising the pain threshold and increasing the amount of endorphins released into the blood. Would you believe it if I told you that acupuncture has been used for surgical anesthesia? It is yet true! Headaches, toothaches, backaches, and the like are nothing compared to surgery, wouldn’t you say so?

Furthermore, acupuncture can increase the levels of dopamine and other neurotransmitters, which may affect many diseases such as Parkinson’s.

People are awed when told that sometimes, similar point combinations are used to treat for instance low and high blood pressure, or other antagonistic disorders such as diarrhea and constipation. This happens because of the very important role of acupuncture of homeostasis effect. It regulates the internal environment to reach the desirable state of balance. It does so by acting on the nervous and the endocrine system, having a strong action in normalizing the functions of our body.

By enhancing our immune system we cannot go wrong. Acupuncture excels here as well! We could call acupuncture our long-term safe antibiotic, as it can potentially be used for infections. However, the best approach is prevention and by having acupuncture treatments one will have an increased number of white blood cells to block all the potential infections.

One of the most important effects of acupuncture is that it can tremendously speed up the recovery process in patients with paralysis due to stroke or other causes. How amazing is that? When many therapies tend to fail in these cases, acupuncture sticks to its goal. How does it do that? By stimulating certain cells from the spinal cord and cranial equivalents. Does that mean that the acupuncture needles will be inserted somewhere around the spinal cord? Not exactly so; rather scalp acupuncture is highly effective for these kinds of treatments.

Extensive research is being conducted at the moment and we could take each of the above explanations in turn and fill books over books with more details. Anyway, the bottom line is that acupuncture works. And if it is not for the fact that is has been the main modality for literally billions and billions of Chinese or that there is plenty of scientific research that shows its benefits, how about you trying acupuncture? I bet you won’t be disappointed!

Board Certified in Oriental Medicine

Board Certified in Chinese Herbology