A Dance Ballet on Gautama Buddha: By Vinatha-ji 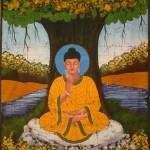 (We seek the Lotus feet of the Enlightened ‘One ‘)

A Kuchipudi DanceDrama on the Life of Gautama Buddha , the Ninth Incarnation of Lord Maha Vishnu

Who else but Smt. Mrinalini Sadananda , a renowned  Kuchipudi Dancer , an excellent Choreographer and now the Director of Kalamandapam, a Washington based Dance School , could come up with such an Enchanting Evening of Pure Dance and Melodious Music  at the Kennedy Center on June 27th, 2009 ?  This  immaculate presentation on the Life of Gautama buddha entitled ‘ Buddham Sharanam Gachaami’   was narrated within 6 Acts and 15 scenes within a time span of Two and a half hours . From Start to finish, Mrinalini and her troupe of talented men, women and children held the huge audience spellbound with their mastery over this Art Form, Kuchipudi. The spirit of dedication, devotion and discipline that Mrinalini had invested in the production of this dance drama was evident from the first scene where the artists portrayed the ten incarnations of Sri Mahavishnu to the  final Climax scene ,when  DalaiLama took center stage with his Benevolent and Compassionate presence . That was an ingenious touch in choreography for it is Dalai Lama who says ” Kindness itself is a Religion’.

It is said that  Adi shankara bhagvadapada was a Buddhist in disguise and a Mayavadi  . Can we lightheartedly parody on this and say our beloved Vishistadvaitin Mrinalini  is also a Buddhist in disguise  and Lady Maha Maya herself ? ? In her   portrayal of Mayadevi , King Shudhodana’s Royal queen and Prince Siddarth’s mother , Mrinalini  totally stepped into the character of Mayadevi and portayed all the Navarasas beautifully – Mrinalini’s excellent abinaya , immaculate footwork and graceful hand gestures were  outstanding. A  proud grandma looked like an   agile gazelle on stage when she moved all around the stage dancing her way into the hearts of an appreciative audience . 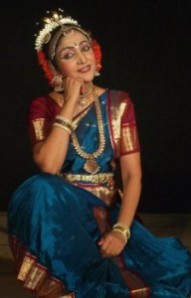 Mrinalini , a Kuchipudi danseuse of Rare Charm and Exquisite Beauty

As the audience was not allowed to use video camera or any other device , i was unable to capture all this on Camera . But , i did manage to get a picture of Mrinalini off stage after the programme was over .  Here is one . 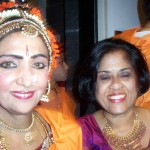 A Narthaki and Her Rasika ( A dancer and her fan.)

It would not be fair to give all credit to Mrinalini because a Dance Ballet’s success depends on the performance of all the participants .  I never knew ‘artistic’ talent  runs in the family . Dr. Keerthana , daughter of Mrinalini, proved that She is the wave of the Future Kuchupudi Scene in Washington DC.. Young and vivacious  Keerthana captivated the audience as Yashodhara ,  the abandoned wife of  prince Siddhartha .  Keerthana’s fluid and flexible body movements indicated that she has had wonderful  dance training from a young age .  Keertana was able to convey different moods such as love ,  Shyness, Coyness , Modesty ,  Grief , Disappointment , Detatchment , etc very effectively  on stage  with her waist movements , chest movements and eye movements . Keerthana’s role as Yashodhara and mother of young Rahul was a memorable performance for who else but a new mother and a young wife  like Keerthana could portray this role so perfectly ? 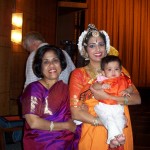 The six month old granddaughter of Mrinalini appeared on stage with her mother Keerthana as Baby Rahul . It was well past 9 ‘o clock and  beyond bed time , Young  Laasya had no stage fright whatsoever and was calm , cool and collected and young Raul was so ‘still’ that you could hear his Father (young  Siddartha’s footsteps .  Only Mrinalini can perform brave feats like this .  In fact , Mrinalini put many child performers on stage in many of the scenes including the Raas lila , The Karate scene ,  the Birds and of course the dancing of Snakes . The children were from all  different age groups from infants to toddlers to pre teens and teens  and exhibited rare skill and prowess  and it is their  unique contributions which made the Show Lively , Vibrant  and Spectacular . Kamalkiran Vinjamuri , the 11 year old nephew of Mrinalini , was outstanding as the young Siddartha and Young Rahul and  was  impressive  in both roles.

How can we forget the main character Gautama buddha ? This role was performed by none other than Mrinalini’s niece,  Ramadivya Vinjamuri . Of all the Navasrasas , Karunyam ( compassion) , and Shantam ( Peace and Tranquility)   are hardest to portray  and these two expressions are best portrayed through eye movements , facial expressions and body language .  Divya came out with flying colors in all the scenes where as a Young Gautama she saved a bird from a hunter’s arrow , rescued the goat from being slaughtered at Kali’s altar , while witnessing the funeral procession of a dead man . and finally taking ‘Sanyasa’ .  Divya did not merely dance – she lived the role of Gautama buddha  and displayed the Buddha nature of compassion and kindness through her  luminous expressive eyes. This was a challenging role and Divya accepted the challenge with courage and confidence . 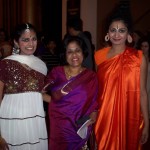 All in all , it was an evening of Truth , Consciousness and Bliss – Sat- Chit- Ananda .  Mrinalini’s forte is her excellent choreographic skills and this was evident throughout the two and half hour performance and my favorite ones were  Scene 2 (Brindavana) , scenes 7 and 8 ( Wedding)  and scene 11 . ( Siddartha’s waking up to Reality) . Mrinalini’s choreography has sophistication , refinement and above all complexity and creativity .  The Costumes were well designed  and every dancer looked his/her part. Aniket Sidhaye , Keerthana’s husband , did a great job as a Master of Ceremonies – he had ready wit and humor and pronounced all the Sanskrit  words/names  correctly – lol:-)

This review  will not be complete if we do not mention about the excellent Live orchestra who gave wonderful support to Mrinalini and her troupe . Without a Live Orchestra and Melodious  Music ,  a dance performance is limp and lifeless. While the dance sequences were entertaining , the melodious music was enlightening.

We need to thank cultural ambassadors like Mrinalini Sadananda  who came to Washington as a young bride in 1971 and have taken a rare Art Form from a village in Andhra pradesh and has given the Art Form a new dimension by putting it on a world stage  like the Kennedy Center. Indeed, a Remarkable Achievement . Guru Vempatty Chinna Satyam has every reason to be proud of his sisya, Mrinalini.

Who  is behind the Success of Mrinalini, the dancer ?  None other than her Husband , Dr. Kuntimadi Sadanananda , well known in Washington circles as  Vedanta Teacher of Chinmaya Mission . While Sadaji is doing selfless service by preaching about Hinduism ( Santana Dharma ) to young and old alike through the platform of Chinmaya mission, his wife Mrinalini is engaGed in the task of exposing second generation immigrant Indians to HinduCulture and Art forms. Our Thanks to this Noble Couple . 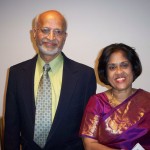 A Vedanti and an Artharthi

What is the eternal message that comes out of this dance Ballet,   Buddham Sharanam Gachaami ? The following lines from Noble Laurette Rabindra Nath Tagore  comes to mind !

“When I thought I would mould you, an image from my life for men to worship, I brought my dust and desires and all my coloured delusions and dreams.
When I asked you to mould with my life an image from your heart for you to love,
you brought your fire and force, and truth, loveliness and peace” 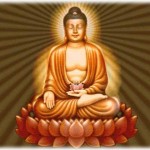 When the embodied being is able to transcend these three modes associated with the material body, he can become free from birth, death, old age and their distresses and can enjoy nectar even in this life.

SOHAM
Those of you who are interested in learning this rare Art Form called ‘ Kuchipudi ‘ please contact Smt. Mrinalini  at  http://kalamandapam.org/ and if you are interested in knowing about Vedanta , pl join  http://www.advaitaforum.org/