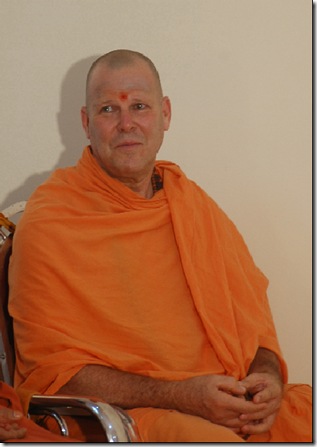 Sometime in early 2009, Alan Jacobs posted his first note to the Harshasatsangh group authored by Swami Sadasivananda.  In it Alan mentioned that Swamiji was available privately to answer any questions people might have, which I thought was quite generous of him, as time is such a limited commodity for most people, even those who populate the spiritual egroups.  Alan then followed this note with the first in a three part series on Surrender written by Swamiji, and I was touched by his combination of wisdom and wit, and his compassionate nature.   Since then, he forwarded a number of his articles to us and I began posting them to the blog with his permission not long afterwards. ( I do take the liberty of changing the format and the photos, but his words remain his. ) I look forward to them, because they are uplifting and sincere, and reach out to the reader with an honest clarity of expression. I always feel uplifted after I have read something he has written.  And I always feel as if he has included everyone…no student left behind!   His bio is below…

Swamiji was born in Florida in 1950. He studied comparative religion at a University in Colorado. He visited Sri  Ramanashramam in 1971. From that Darshan of Arunachala he determined to take Sanyas.In 1974 he received initiation in the disciple lineage of Puri Sankaracharya. He visited Anandamayi Ma’s Ashram while she was still alive and received the golden touch of this Joy-Permeated Mother, and remained under her guidance until her passing. He was there for thirty years giving service and practicing sadhana. Since then he has been living in Tiruvannamalai and is a frequent visitor to Ramanasramam where he is available, and gives advice to questioners. He has made a thorough study of Bhagavan’s teachings as well as those of Sri Ramakrishna.

Swami has also completed a new book regarding Bhagavan’s teachings on “Practical Sadhana” that isto be published by Sri Ramanashramam this spring. This book, as well as a great deal of additional works by direct disciples of Bhagavan including various other aspects of spiritual instructions are  posted on a website that is maintained by the Swami.