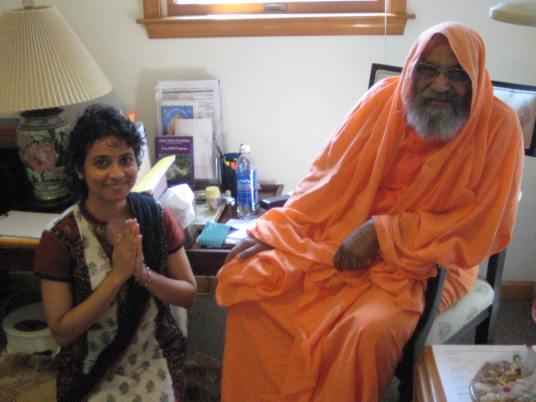 Even before our beloved Pujya Swamiji Dayananda Saraswati’s mahasamadhi, He brought tears to my eyes. It was the Love He embodied.

He was an extraordinary teacher of Vedanta, a great visionary and mobilizer for Dharma. “How” He was, taught me more than anything else. He was Love embodied into a saffron laced, declining, faltering body that I had the immense grace of first beholding at Arsha Vidya Gurukulum, Saylorsburg in 2012.

In August 2012, the Saylorsburg Gurukulum had put up an impressive tent to house the grand annual program for its 26th anniversary celebration. I was walking toward the tent a little prior to the commencement of the program, and happened to run into Pujya Swamiji making His entrance. He had alighted from a golf cart but did not directly enter the tent. He stopped at the tables near the entrance, noticing what preparations were made, whether the refreshments for the guests were in order…The care and interest he took in the “small” details were touching.

Pujya Swamiji then presided over the program on stage, giving the Anniversary talk, honoring and awarding the accomplishments of several individuals gathered, and concluding with a Q & A session for an audience that was over a 1000 strong. Pujya Swamiji spoke with ease, clarity and humor. I was amazed that at 82 (then), He held the stage effortlessly for hours… concluding only when the very last question from the audience was addressed.

Later when I had the opportunity to touch His feet, I noticed His attentive care to meet my eyes as He blessed me. Not a wasted moment for our Pujya Swamiji – He was present every moment.

When I attended courses in the AVG lecture hall, I noticed how His very entry brought a palpable love and reverence for Him among the audience.

Pujya Swamiji personified joy and freedom with such ease and spontaneous expression. He would break into song especially when Pandit Mukesh Desai sat next to Him with his harmonium. It was pure delight to watch His spontaneity and joy.

The loving softness He emanated invited one to feel close to Him. He was like Father and Mother.

Pujya Swamiji, my loving pranam to you always. We are so boundlessly grateful for you; you showed us Fullness in your every movement, in every word clarity, in every gesture compassion, in every deed service. We love you. We miss your beloved form.Your Love moves and inspires us always.