Pomegranate For Your Skin: By Dr. Jeanette Jacknin 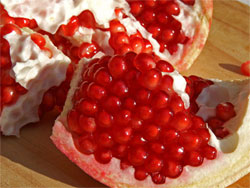 Each year cosmeceutical companies and consumers alike search for the next big thing in anti-aging discoveries.  This year, with everyone going “green” and searching for natural ingredients, pomegranate definitely is “in” in the anti-aging cosmeceutical industry. Dr. Carl Thornfeldt, MD in his March 2008 article in the Journal of Cosmetic Dermatology states “Mucocutaneous inflammation as the final common pathway of many systemic and mucocutaneous diseases including extrinsic aging has been established at the molecular and cellular levels.”[1]  Pomegranate has known antioxidant and anti-inflammatory activity and has been documented in double-blind clinical trials to significantly improve signs of skin aging. Of the over 8000 known antioxidant ingredients, pomegranate is 1 in less than 20 have been incorporated into topical formulations which have been documented in human clinical trials to reverse signs of aging of the skin.

The status of the Pomegranate goes back as far as the history of agriculture itself, 10,000 years. Allusions to the pomegranate are readily found in the oldest cultures of the Indus Valley, ancient China, and classical Greece, as well as in the Old Testament. It has a long history of medicinal use, with the peel well regarded for its astringent use.

Anthocyanins account for the red-purple color of the pomegranate’s skin, flesh, and seed. More importantly, pomegranate juice made from squeezing the whole fruit is a rich source of punicalagin, a large polyphenol antioxidant. Pomegranate seeds are a good source of punicic acid, similar to conjugated linoleic acid.

Research has shown that the physiological effects of pomegranate juice constituents are remarkable in their preventive potential against two of the major chronic diseases of aging – heart disease and cancer. There is evidence of the pomegranate’s impact on heart disease, including its ability to enhance nitric oxide production in endothelial cells.[2]

There is also significant antiproliferative effects attributed to the pomegranate [3] in battling several breast cancer[4] and prostate cancer[5], and it has been shown to retard tumor growth in animals. One can also hypothesize that pomegranate juice may work the same way on skin cells.

In a study carried out at the University of Michigan Medical School, aqueous fractions prepared from pomegranate peel, fermented juice and lipophilic fractions of the pomegranate were examined for effects on human epidermal and dermal cell function.

Pomegranate seed oil was shown to stimulate epidermal call proliferation, and a mild thickening of the epidermis was observed!  In contrast, pomegranate peel extract stimulated type I procollagen synthesis by dermal fibroblasts, These results indicate the potential of pomegranate fractions for facilitating skin repair by promoting regeneration of the dermis and epidermis.[6]

Thus, it would be surprising if many cosmeceutical companies don’t add pomegranate to their mix of anti-aging ingredients, with its clinically proven anti-inflammatory, anti-oxidant, and anti-aging properties. 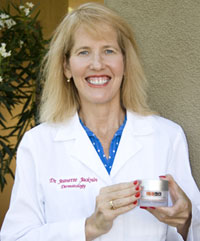 Board-certified Dermatologist Dr. Jeanette Jacknin has distinguished herself as a well-respected physician and author whose passion is nutricosmeceuticals and holistic dermatology.

Dr. Jacknin’s credentials are many and start with the medical degree she earned from Medical College of Virginia in 1983. There she completed her Dermatology Residency and served as Chief Resident. Dr. Jacknin’s education and vast experience have led her to become a published author of the classic book, Smart Medicine for Your Skin, published by Penguin Putnam in 2001. For easy access, the book is now published in e-Book format, at http://www.drjacknin.com for instant download on the internet.

In addition, Dr. Jacknin has contributed to an abundance of articles published in numerous high profile magazines, such as Alternative Medicine, Body and Soul, Better Homes and Gardens, Reader’s Digest, Men’s Health, Natural Health, Shape, and Women’s World Magazine.  She is a regular contributor to In Cosmeceuticals, Natural Solutions, Carefair.com and AZSpaGirls.com. She has been featured on radio programs like: Health Talk, The Deborah Ray Show and the Wealth of Health Nutrition Hour.

To find out more about Dr. Jacknin and her skin care philosophy and products, please visit her website.