In 1985 on a visit to family in Australia I was on Bondi Beach, where I ate a hamburger. I fell asleep on the beach and had a strange dream that I was a cow. I saw the whole process of the slaughterhouse, including fear, smells, noises, terror, cruel treatment etc.

It was a horrifying nightmare and I awoke saying aloud ‘They know, they know they are to be cruelly slaughtered’. That day I became a vegetarian. I had always said that if I ever really thought about the morality of eating meat, I would probably stop. END_OF_DOCUMENT_TOKEN_TO_BE_REPLACED

Research to be published in two journals focusing on animal behavior suggests that virtually all animals, including lobsters, crabs, fish, shellfish, and insects, can suffer.

Chris Sherwin, a senior research fellow in the Clinical Veterinary Science division at the University of Bristol, commenting on the study told Discovery News, “The question of whether invertebrates experience pain is fundamental to our legislation that protects animals and our behavior, attitude and use of these highly complex organisms.”

Editor’s note: Pramoda-ji is the President of the Jain International Meditation Center in Mumbai (Bombay). She is also on the on the Board of Directors for PETA in India (People For Ethical Treatments of Animals).  She works for the Reverence for Life Society and for Beauty without Cruelty which promote animal welfare and the vegetarian way of life worldwide. Promada-ji has also authored a number of books – Foods of Earth; Tastes of Heaven – Jain Symbols – To Light One Candle (co-authored with Clare Rosenfield) – The Book of Compassion (coauthored with Pravin K. Shah). More on Pramoda-ji can be found on the Jain Meditation website.

Milk: At What Cost?

Today all are aware that the global warming, ecological crisis and environmental pollution is threatening the entire human race making it a matter of graveconcern for all, especially for those who are conscientiously aware. For those who do not know that when one life is threatened all life is at risk.It is all very well to say that individuals must wrestle with their consciences–but only if their consciences are awake and informed. Industrial society, alas, hides animals’ suffering and does not allow the conscience to awake.

When we observe minutely around us we see that even nature sees the whole universe as a great cosmic mechanism with its own self-propelling force. We being part of that mechanism we are responsible for conducting ourselves in harmony and rhythm with the nature and rest of the living beings. It is important to know that each of us is a vital thread in another’s life tapestry and so our lives are woven together for a reason, reason to survive and to live in peace and help others live in peace.

It is with this view that the core teaching of Dharma (Religion) has remained to be Ahinsa since time immemorial. All its practitioners are vegetarians consuming neither meat, fish, fowl, poultry nor eggs. Now with increasing awareness and knowledge of the torturous lives the animals live in the factory farms, there are millions all over the world who have upgraded themselves to becoming VEGANS.

*All those who practice Ahinsa Parmo Dharma (Ahinsa the supreme religion) would not take any life for food, fashion or sport.

*It is time we face the truth and see how much suffering is involved in one tall glass of milk. Each sip contains growth hormones, fat, cholesterol, allergenic proteins, blood, pus, antibiotic, bacteria and virus. Hence milk is a deadly poison.

* It is with the increased prosperity, people are consuming more and more amount of meat and dairy products every year. Global meat production is projected to more than double from 229 million tons in 1999/2001 to 465 million tons in 2050, while milk output is set to climb from 580 to 1043 million tons.( FAO Food and Agriculture Organisation of UN 2006 Report )

*According to a new report published on Nov.29th 2006 by the United Nations Food and Agriculture Organization, the livestock sector generates more greenhouse gas emissions as measured in CO2 equivalent – 18 percent – than transport. It is also a major source of land and water degradation.

*Factory farms produce run-off that pollutes our streams and rivers, endangering not only the water supply for humans but also harming delicate eco-systems.

*Meat-based diets require 10-20 times as much land as plant-based diets – nearly half of the world’s grains & soybeans are fed to animals.

*Cows produce milk for the same reason that humans do-to nourish their young.

*Calves born on dairy farms are taken from their mothers when they are just one day old and fed milk replacers so that humans can have the milk instead.

*In order to keep a steady supply of milk, the cows are repeatedly impregnated. 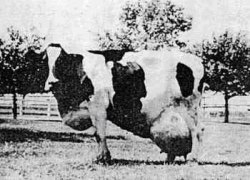 *Several times a day, dairy cows are hooked by their udders to electronic milking machines, which can cause the cows to suffer electrical shocks, painful lesions, and mastitis. Their udders become sore and heavy with the milking machines and touch the floors.

*Some spend their entire lives standing on concrete floors; others are crammed into massive mud lots.

*Although cows would naturally make only enough milk to meet the needs of their calves (around 16 pounds a day), genetic manipulation, antibiotics, and hormones are used to force each cow to produce more than 18,000 pounds of milk a year (an average of 50 pounds a day)www.chooseveg.com ( National Agriculture Statistics Service.-2004Feb.17 Milk production. USA Department of Agriculture)

*In order to further increase profits, Bovine Growth Hormone (BGH), a synthetic hormone, is now being injected into cows to get them to produce even more milk. The hormones adversely affect the cows’ health and increase the rate of birth defects in their calves. BGH may also cause breast and prostate cancer in humans.

*Cows have a natural lifespan of about 25 years and can produce milk for eight or nine years and when their milk production drops they are sent to the slaughter house.

*The stress caused by factory farm conditions leads to disease, lameness, and reproductive problems that render cows worthless to the dairy industry by the time they are four or five years old, at which time they are sent to the slaughterhouse.

Cruelty to a Veal Calf in a Crate

*Few consumers realize that veal is a direct by-product of the dairy industry. In order for dairy cows to produce milk, they must be impregnated. While female calves are slaughtered or added to the dairy herd, many male calves are taken from their mothers when they are as young as one day old and chained in tiny stalls to be raised for veal. 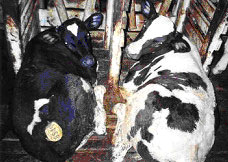 *Confinement is so extreme that they cannot even turn around or lie down comfortably. As author John Robbins notes, “The veal calf would actually have morespace if, instead of chaining him in such a stall, you stuffed him into the trunk of a subcompact car and kept him there for his entire life.”

*Motherless and alone, they suffer from ulcers, diarrhea, pneumonia, and lameness.

*After three to 18 weeks of this deprivation, they are trucked to the slaughterhouse, where their young lives are taken from them.

The above information is taken from WWW.chooseveg.com

Veal calves are chained by their necks in tiny crates & fed an anemia-inducing diet. (www.chooseveg.com)

*Does the above facts and truth strike a chord in your heart, or is it another piece of information to read and forget about it? Think, ponder and then decide. It’s your life, it’s your choice.

*Today the dairy cows and buffaloes in India also go through the same fate as their counter parts in western countries, becoming milking machines for human beings.

*The cows and buffaloes are kept pregnant every year for a consecutive 6-7 years period by artificial insemination.

*As soon as she stops yielding milk, she is dragged to the slaughter house for beef meat. The life span of a cow is 20-25 years but she dies in 6-7 years.

*Poor calves are deprived of their mother’s milk that is rightfully theirs. They are fattened by hormone injections and kept in dark sheds away from sunlight in oppressed conditions, preparing them for veal meat.

*These cows’ milk is for their calves but now milked for human beings.

*Their calves go hungry without a drop of milk and we become the cause (Nimitta) for their hunger and slaughter, violating the first vow of Ahinsa.

*The Jains believe that to take anything without the permission of their owner is a theft (Adattadan).

*They also know that it is acquiring the Karma of Obstruction (Antaraya) causing the separation of mother and its baby.

*Giving up dairy and becoming Vegan we incur minimum of negative karmas and thus purify ourselves.

*Knowing the facts and yet if we are not able to change our food habits and give up dairy products we have to question our beliefs and commitment to dharma.

*How can we be at peace if we are causing pain and suffering to innocent living beings?

*The law of nature – Dharma is nothing but cause and effect. What we sow that we grow. Whatever suffering is caused to animals comes back to us like a boomerang?

*So becoming VEGAN is one of the most important and effective actions we can take to ease the strain on our Earth’s limited resources, protect the planet from pollution, prevent global warming, and save countless species from extinct.

To sum this up, let me quote Mahavir who expressed it succinctly:

“One who neglects or disregards the existence

of earth, water, fire, air, vegetation and other living beings

Disregards his own existence

which is entwined with them.”