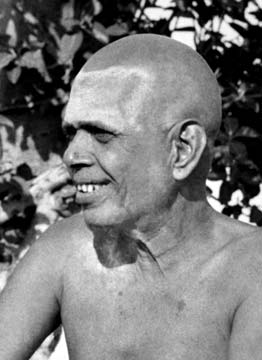 “Who is a master? He is the Self after all.” Ramana Maharshi

The company of peaceful Sages (Satsangha) and living in Ahimsa (harmlessness) is considered the primary influence that leads to Self-Realization. The forced attempts to discard various habits and conditioning and practicing different techniques to calm the mind have built in limitations. However, such methods can be pursued with benefit if one is already inclined towards these practices.

When strong inner motivation is present, one is automatically propelled towards Self-Awareness and Meditation. The fog of confusion then quickly evaporates and leads to Self-Seeing, Self-Being, Self-Realization, and Silence of the Heart.

Meditation and mind calming methods, can be effective at many different levels if practiced in the context of a clear understanding. Such practices, however, cannot by themselves end the fundamental agitation of the mind which continues at more and more subtle levels and causes suffering.

The nature of the mind is to hanker after that which is not real and is constantly subject to change. Not knowing who we are, where we come from, and where we are going, we still continue chasing after dreams built on the sand castles of desires.

If we become aware of this, we can see the primary nature of suffering, and direct our attention to the mystery of life and the nature of our perceptions.

In Indian spiritual traditions, a guru serves as a conduit to help us along the path. However, many things we hear about gurus these days are not appetizing. Still, if we realize the truth of the pure teachings, that the Supreme Reality is indeed our own Heart which guides us, then we can walk the path lightly without being misled.

The Self Always Reveals It Self from Within. Listen. Remain aware.

Be utterly indifferent to the clever words, miracles, and magical techniques that promise salvation. If you have the courage, open your wisdom eye and see clearly what attracts you to such things and people.

What is it that these gurus have to give you that you do not have? Question seriously and honestly and investigate the root of your hopes and fears.

There are many active marketers of “spiritual wisdom.” It has now become a public relations game with the many modern gurus as they compete in the free market of spirituality. Many spiritual teachers today attempt to distinguish themselves on the basis of their “enlightenment”, their spiritual experience, and how “awake” they are. Some claim that by their magical touch, shaktipat, or willpower, they can create miracles and remove obstacles from someone’s path. We cannot say that all such teachers and gurus are good or bad. But we have witnessed enough scandals among spiritual teachers to conclude that there is a need to be alert to the human tendency of those in power to exploit others financially and even sexually. Some teachers, giving satsang, and teaching yoga and advaita, are no doubt good and genuine people, but others may be quite ignorant and have generally bad tendencies.

I will share with you briefly a story. One time, I was walking my teacher, Chitrabhanu-ji, back to his apartment and we were speaking about the guru-disciple relationship. During the conversation, he said to me, “You should never follow any guru.” I was quite surprised to hear him say that because you see Chitrabhanu-ji was my spiritual teacher and mentor and I referred to him as Gurudeva. All Indian spiritual traditions in Hinduism, Jainism, Buddhism, in fact, have the guru-disciple relationship at their core. So I asked Chitrabhanu-ji, “Gurudev, why do you say this? Why do you say that I should never follow any guru?” My teacher smiled and said, “Well, what if the guru goes crazy and starts acting nutty?” So I had a good hearty laugh.

My teacher, Gurudev Chitrabhanu-ji, was also my friend. I was only 21 when I met him. He was then 56 and now he is in his mid 80s (written in 2006). During the time spent with him, I had the sense that he wanted to make sure that I understood the realities of life and was fully independent and able to think on my own. His success as a teacher was that he made me independent of himself as well. Chitrabhanu-ji used to say that…” a real guru is like an ice cube. He cools your consciousness and then disappears without a trace.” From my teacher I learned the sacred philosophy of Ahimsa (harmlessness), which is the cardinal principle of Jainism. Mahatma Gandhi of India was an exemplar of the practice of Ahimsa in the last century.

After some years, when I left my teacher to go back to graduate school, he said that I should always remember the principle of Ahimsa and keep that as my ideal. From Ahimsa follows being able to understand many different points of view and to approach situations with awareness and compassion. During the years that I studied with my teacher, he never asked me for anything. No money, nothing. Actually, I had nothing to give. At that time I used to teach yoga to earn a livelihood and it was barely enough to pay the rent and eat.

Sometimes I see gurus who treat their students badly and even exploit them financially and in other ways. I see the huge contrast between that and how my teacher treated me, despite my youth and immaturity, with the utmost respect and courtesy as a human being and his equal. So I tell students on the spiritual path that it is never a good idea to hang around a so called guru or a spiritual teacher who demeans you or insults you or disrespects you in any way. It does not matter if such a person is charismatic or if your friends adore him or her. In Patanjali’s ancient yoga sutras, Ahimsa (harmlessness or nonviolence) is mentioned as the first principle of yoga. A guru or a teacher whose words and attitude carry and convey violence cannot be good for you.

Understand that, like you, most gurus and spiritual teachers today have their own personal challenges and suffering. You need not judge others too harshly. Yet at the same time one must be free to follow one’s own vision. With compassion for others and one’s own self, one should keep one’s focus utterly, totally, and completely pure. This means that you should not give in to the attraction of confusion, and compromise in seeking the Truth by creating a permanent dependence on another person. If a guru creates circumstances and subtly encourages you to do become dependent or submit to his/her will, know that such a person is controlled by his or her own power needs and greed. What can such a person give you?

When I first met my teacher he told me frankly, “I cannot give you enlightenment. Gurus who claim such a thing deceive their students. To become Self-Realized, one must carefully investigate the mind and perceptions and meditate on the nature of the Self.”

I pass this on to you. No one can give you the Truth. Truth is always revealed from the inside. And when it comes, you see that your own essence is that of Truth. That is our mystery that the perfect and complete love that we long for is ultimately seen in our nature and our own heart. The ancients called it the Heart, Sat-Chit-Ananda, Existence-Knowledge-Bliss, which is our very being.

Let your effort be absorbed in peaceful Self-awareness. There is absolutely nothing else to be done.

You have everything you need.

Think not that you must awaken,

now or at some later date.

Know this for certain,

That You Are Already Wide Awake!

Abide in that Heart of Being.