Sri Muruganar, a close disciple of Sri Ramana Maharshi, read from the scriptures before Bhagavan:

“There is a secret language of silence and smiles understood by mutual lovers, but not noticed by onlookers. The operation of grace is secret and not spectacular.”

There is so much that can, and should, be said about the smile of a human. Indeed the exaltation and upliftment of a smile is essential even for saints. Saint Francis de Sales once said: “A saint that is sad, is a sad saint!” Yes, smiling opens the heart and lets your light shine into the world. Scientist say that it makes you healthy. It takes away stress, increases the endorphin flow (the inner happy drugs in the blood) and it is contagious. When people smile others are attracted – for unconsciously they think – “gosh that person is happy” – maybe I can become happy too by association with such happy folk. We learn from those who have unlocked the secret – and have found some "stillness, peace, happiness, and positive energy" and we know that this is God shining through them – because it’s all down to a "heart connection with the Divine.” 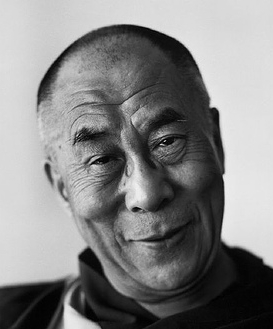 A friend once conveyed to me that at a lecture at Alexander Palace in London some15 years the Dalai Lama was the keynote speaker.

After the talk he was walking along the park with all his bodyguards to get into his car and she just happened to be there by the car and he turned and gave her this huge smile – at once she received this amazing flow of loving kindness from him – she still remembers that his smile was absolutely full of grace, genuine and a huge gift. It was like he was carrying all the smiles of his linage.

Mother Teresa said: "Every time you smile at someone, it is an action of love, a gift to that person, a beautiful thing." (Mother Teresa’s smile upon mankind was seen through the compassionate labor of her hands!)

Everyone understands, in a totally intuitive way, what a smile means. It transcends language and cultural barriers. It is the clearest, simplest manifestation of the joy that lies within us. It is the quickest and most direct way to connect with another human being by touching tha

t place of joy within them. A smile is shorthand for "I recognize and acknowledge the God within you.”

These truths are undeniable, and beyond the reach of debate. With a clear understanding of the ability of every human to communicate “stillness, peace, happiness, positive energy and uplifting compassion", let us attempt to consider what actually happens to humans when God, or someone whose complete awareness is saturated with the Presence of God, smiles upon them!

There is a beautiful saying from the scriptures of India:

The love of the Devi manifests as a smile,
therefore She loves to smile!

The most learned scholars who have sought to plumb the depths of the Bhagavad Gita universally agree that the actual teaching from Lord Krishna begins in the eleventh verse of Chapter Two:  The Blessed Lord spoke:

“You have mourned those that should not be mourned,
and you speak as if with wisdom;
The wise do not mourn for the dead or for the living.

Many of the very wisest of these scholars, those who strive to comprehend the Gita in its highest mystical sense, profoundly declare that the Lord’s teaching to mankind actually begins with the tenth verse of Chapter Two. They boldly go further and declare that the Gita’s entire message is actually conveyed by the very first action Sri Krishna makes before Arjuna – and us!

As if assuming the manifestation of Lord Dakshinamurti, Sri Krishna being named as the “Lord of the Senses” (Hrishikesha), responds to the despondency of Arjuna in silence. From the uncompromisable position between the two opposing armies drawn for battle, the Lord smiles!

“Those devotees who, during the invasion of doubt, completely give themselves up to the Spirit in inner silence and submission are able to perceive the indescribable, all-purifying Light of God playing across the firmament of their inner perception.”

“This indescribable “Smile of the Spirit” is fully perceived only by those devotees whose spiritual lives are directed by ‘right action’. For as the Buddha demonstrated, through ‘right action’ alone does one cultivate ‘right perception’. There is little mystery, and even less theory (for the Buddha was not a theorist) behind this proclamation. It is simply a definitive declaration that one must lead a clean spiritual life; proper eating, right moral behavior and deep meditation!”

Arjuna was the epitome of a devotee on the verge of the highest spiritual revelation and attainment, for he had chosen the Lord Himself to direct the horses of his chariot, to be his Guiding Power. The name “Arjuna” mystically symbolizes self-control. The means of achievement of this is demonstrated by Arjuna’s ‘right action‘ of choosing Sri Krishna to hold the reigns that guide the five horses (five senses) of his chariot (his mind). (above quotes and paraphrases are excerpts from The Bhagavad Gita, God Talks with Arjuna, Paramahansa Yogananda, Yogoda Satsanga India Press 2002.)

Thus Arjuna’s mind was under control and still. His surrender was active and provocative, in that he was now fully empowered to arouse and encounter the sense solders of the ego. Furthermore, he was ready to fight under the shadow of the monkey-ensigned banner signifying devotion and discipleship.  In response to his submission and devotion he was transformed through the illuminating smile of the Lord, which attuned him to have “an ear to hear” the still small inner Divine voice of his Soul!
In our modern era, during the sojourn of Sri Ramakrishna, another soul was transfixed and transformed by a slight smile from the Face of a Living God.

Girish Chandra Ghosh was considered to be one of the closest and dearest disciples of Sri Ramakrishna, and unmistakably he was the most flamboyant and rowdy. In addition to having become irrevocably attached to Sri Ramakrishna, he was addicted to alcohol and frequent visits

to houses of ill repute. On one occasion he was fully inebriated and reeling his way to visit one of his “ladies of the night” when instead he changed his mind and turned around to make a visit to his Lord and Master. Upon arrival at Sri Ramakrishna’s room he attempted to bow at the Master’s feet, only to collapse in a heap of reeking ‘pickled’ flesh. Sri Ramakrishna began to give him advice in a manner to persuade him to correct his behavior.

The truth is well known that “the Lord works in mysterious ways”, and what happened next ascended such heights of “mystery” that all present fell to their knees and wept. Girish, too drunk to stand, half-raised himself and tried to focus on the face of Sri Ramakrishna. His mind, his reasoning and his entire personality were numbed into oblivion. But upon beholding the living face of Sri Ramakrishna his heart burst forth with an all-consuming silent prayer for mercy. As the Master’s sweet words rained upon him even as nectar, Girish raised his hand up and said: “Stop! Don’t give me any advice, it will do no good. Please do something to change my life!”

In response to this soulful plea, the Master smiled!

All in the room said they saw only a very slight smile play across the lips of the Master. But the power and sweetness of that slight smile was so indescribable that in a wondrous flash, Girish Chandra Ghosh was completely transformed and purified.

Only at a later date could Girish attempt to speak of the wondrous event. And in doing so he proved that though now a completely changed being, he still retained a vivid sense of humor. All he could say was: “If I had known that there existed in the Master such a big pit that I could cast all of my sins into; I would have committed a lot more!”

In our own times divine embodiments of Grace have come forth to grant the heartfelt prayers of many who yearn to live a higher life.

Sri Anandamayi Ma was given the name “Joy–permeated Mother” mainly due to her lustrous smile that transformed onlookers by a mere glance.

As a young baby, the women in her village would line up early every morning to take turns holding her. They longed for a smile from the baby Goddess, which always came. From that smile, the women could endure the day’s bitterest hunger and direst labor, for their hearts were satiated with bliss and the love of God.

It was said of Sri Ramana Maharshi that he had “A look that pierced.” Such was the case that people had to avert or close their eyes when his look fell upon them. Nevertheless, when his look couched his divine smile, all were transfixed. Many have tried to communicate the wondrous experience of beholding the smile of Bhagavan; they all finally admitted that their words fell far short of the wonder. Here are a few instances of those who attempted to convey the smile that seemed to” burst open the very gates of heaven”.

“You can imagine nothing more beautiful than his smile. There is no way of describing the radiance of his smile.”
A simple woman said: “I don’t understand the philosophy but when he smiles at me I feel safe, just like a child in its mother’s arms. I had never yet seen him when I received a letter from my five- year-old daughter: ‘You will love Bhagavan. When he smiles everyone must be so happy’.”

“And he would explain that it is the Guru not the disciple who sees the progress made; it is for the disciple to carry on perseveringly with his work even though the structure
being raised may be out of sight of the mind. It may sound a hard path, but the disciples’ love for Bhagavan and the graciousness of his smile gave it beauty.”

“The Maharshi with an ineffable smile which lit up His Holy Face and which was all-pervasive, shining upon the coterie around him, replied in tones of certainty and with the ring of truth; “Divine Grace is essential for Realisation. It leads one to God-realisation. But such Grace is vouchsafed only to him who is a true devotee or a yogin, who has striven hard and ceaselessly on the path towards freedom.” Talks with Sri Ramana Maharshi #29

“He sat motionless with a sparkling smile on his face like the foam on the waves of the ocean of ananda.”

“His gentle smile shone like the cool rays of the moon. His words simply rained amrit. We sat there like statues without consciousness of the body.”

“I saw him looking at me with large penetrating eyes, wreathed in smiles rendered divinely soothing by their child-like innocence.”

At the time of Bhagavan’s Mahanirvana (leaving the physical body: “Unexpectedly, a group of devotees sitting on the veranda outside the hall began singing ‘Arunachala-Siva’ (Aksharanamanamalai). On hearing it, Sri Bhagavan’s eyes opened and shone. He gave a brief smile of indescribable tenderness. From the outer edges of his eyes tears of bliss rolled down. One more deep breath, and no more. There was no struggle, no spasm, no other sign of death: only that the next breath did not come.” 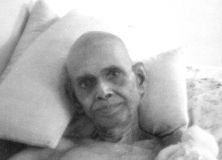