Today, we are going to share on the third and fourth principles of what we have been sharing for the past few sessions. They are :

3. Sri Bhagavan said :“If one identifies oneself with the body, ‘Karma ’ [destiny] is inevitable and unavoidable (which means, that one is bound, one is in ‘bondage’ ). If one’s attention is turned inwards, one is always ‘free’ . One is ever a ‘Free Man’ .”

4. When asked whether His Direct Teaching could be put in a single word, Sri Bhagavan answered : “ ATTENTION ” [ “Ulladunar ” in Tamil, meaning, “Attention paying attention to ATTENTION.” ]

( 1. In 1936, Paul Brunton asked the Maharshi : “Can a man of the world, viz.,one who is involved in worldly activities, practice this Jnana Marga or this Wisdom Path ?”

Sri Bhagavan’s cryptic answer was : “There is no contradiction between work and Wisdom.”

2. On another occasion, Sri Bhagavan said : “The only purpose of life is to realize the SELF. All other activities are a waste of time.” )

There are two stories – like the two sides of the same coin – to elaborate on the “third principle”. We are all children in one way – each one’s heart is that of a child – and hence, throughout our living span of existence we are always absorbingly interested in listening to stories !

The First story to affirm that “if one identified with a body, destiny is inevitable” :

Major A.W. Chadwick was the first Westerner to settle permanently as a resident at the Ashram from 1938, till he dropped the body in the 1960s. He had adopted himself in such a harmonious traditional Ashram-way that viewers wondered over his way of life ! Once a devotee who was amazed looking at Chadwick, asked Sri Bhagavan as how it was possible for Chadwick to adopt himself to such a pious Hindu way of living.

Bhagavan gave the following reply : “Chadwick was with us. He had a great fascination for the Westerner way of life that he is born in the West. Now, he has come back to us !”

Paying attention outward of oneself and getting involved with activities outside of oneself traps one into the octopus grip of the ‘Law of Karma’ , giving effect to the series of birth and deaths !

The Second story confirms : ‘ If one’s attention is turned inwards, one is always ‘free’ . One is ever a ‘Free Man’. ’

Once a stranger from North India came to Sri Bhagavan and was firmly seated in the Hall. When almost all had left the Hall, he approached Bhagavan and pleaded, thus : “Bhagavan ! I had committed four murders in my life. I had escaped uncaught; not even my wife knows about it. Yet, my conscience now pricks me, very deeply too. Is there a redemption for me, my Lord ?”

Give up the thought that you had murdered !” There ruled absolute silence.

The stranger shed profuse tears of joy and gratitude. He prostrated to

Sri Bhagavan and left. Many years after that, an old devotee, H.C. Khanna of Kanpur, happened to travel in the Himalayas. Bhagavan had already dropped the body. Khanna met a Swami with impressive countenance seated in a cave.

He introduced himself as a devotee of Bhagavan Ramana. The Swami got up and touched the feet of Khanna, saying : “You have come from Arunachala ! My God and Guru is Bhagavan Ramana. How fortunate and how blessed I feel in the proximity of a fellow-devotee of the Supreme Master ! “ He, then, narrated the whole story of “his Four Murders” and how there was no trace of affectation left in him; and, how following the commandment of Bhagavan, instantly released him from the grips of ‘Karma’ . After narrating this wonderful story to me, Khanna added : “Once, Bhagavan told me in the Hall : ‘ If one accepted the ‘Prarabdha Karma’ , it will start operating. And, if one refused to identify oneself with ‘Prarabdha Karma’ , operation of ‘Prarabdha Karma’ is totally nullified.’

Is it not clear that a true seeker should ever be a “dheera” [ bold & courageous ] ? How to deny the ‘Karma’ ? This will be the obvious next question ! Only by turning within and surrendering oneself to the Inner Guru.

Silence is the Inner Guru.

The fourth principle is of supreme importance : “Attention paying attention to ATTENTION.” Sri Bhagavan repeatedly guided us : “ Go within, Plunge within, Dive inwards.” To take one’s attention inwardly, one has to have a correct grasp of Bhagavan’s ‘Direct Teaching’ of “Wisdom Realistion”.

Read the following verses from Bhagavan’s “ Forty Verses on Reality ” :

Under whatever name or form we worship IT, IT leads us on to Wisdom of the Nameless, Formless Absolute. Yet, to see one’s true SELF as the Absolute, to subside into IT and be one with IT – this is the True Wisdom of Absolute Reality.

‘Twos’ and ‘Threes’ ** depend upon one thing — the ego. If one asks in one’s Heart, ‘What is this ego ?’ and finds it, they slip away. Only those who have found this, know the Absolute Reality. And, they will never be perplexed.”

Sri Bhagavan has sung : “Easy is Self-Wisdom; the easiest thing there is.”

Let us adhere to his guidance and boldly take a plunge ‘within’ NOW and be the SELF ! 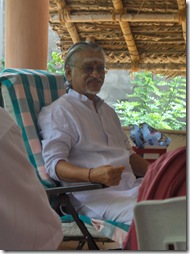 Born in 1936, up to the age of 14 years old, Ganesan grew up in the presence and proximity of Bhagavan Sri Ramana Maharshi. His sacred memory of the Great Master is rich in its content; and, even at that tender age he could see Sri Ramana as the greatest compassionate human being.

On April 14, 1950 – the day the Great Master chose to leave the body – the adolescent Ganesan stood near the entrance to the room where Sri Ramana was lying and was fortunate to witness the brilliant flash of Light that later moved towards the top of the Holy Hill – Arunachala.

Ganesan obtained a Master’s Degree in Philosophy; and, then came to stay permanently at “Sri Ramanasramam, Tiruvannamalai” – the sacred abode of Sri Ramana Maharshi – taking care of the Old Devotees of Sri Ramana. He did it as his sole sadhana (spiritual practice). In that way, he collected the reminiscences of Sri Maharshi from those Old Devotees which have never before been recorded.

His close contacts with sages and saints, including Swami Ramdas, Mother Krishnabai, J. Krishnamurti, Nisargadatta Maharaj and Yogi Ramsuratkumar, he says, have deepened and widened his understanding of the ‘Direct Teaching’ of the Maharshi. However, he feels himself to be an insignificant ‘dust’ at the Holy Feet of Bhagavan Ramana.

He has traveled widely and spread the ‘Direct Teaching’ of Sri Ramana Maharshi, in its pristine purity, wherever he was invited to give talks.

At the veranda of his cottage – “Ananda Ramana” – he meets earnest seekers, every Monday and Thursday, between 9.30 and 11 a.m., sharing with them the spiritual treasure entrusted with him by all these holy and sacred souls.