Legends and stories of Al-Hallaj: By Aparna Sharma 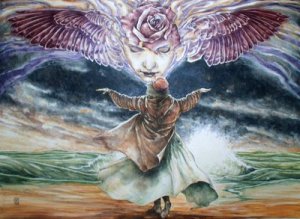 What earth is this
so in want of you
they rise up on high
to seek you in heaven?

Look at them staring
at you
right before their eyes,
unseeing, unseeing, blind…

How did Hussain ibn-Mansur come to be called ‘Hallaj’, a name that translates as “Carder of cotton”? According to Attar, Hussain ibn-Mansur was passing by a cotton warehouse one day and saw a pile of cotton balls. When he pointed a finger at the pile, the seeds, at once, separated from the fibers. He was also nicknamed Hallaj al-Asrar- The “Carder of Hearts,” because he would often read people’s minds and answer their questions even before they asked.

I do not cease swimming in the seas of love, rising with the wave, then descending; now the wave sustains me, and then I sink beneath it;

love bears me away where there is no longer any shore.
(Diwan al-Hallaj, M. 34)

Al Hallaj had so realized his oneness with the cosmos (or the Divine) that to him, the barriers of space and time didn’t make a difference. Once while crossing a desert with a group of people on their way to Mecca, his companions were hungry and expressed a wish for some halva. Out of thin air, he produced a tray of warm, sugar-covered halva and gave it to them. On tasting it they exclaimed that the sweet was typical of such-and-such neighborhood in Baghdad and asked him how he had obtained it. His only reply was that to him Baghdad and the desert were the same.

For one who sang “You dwell in my inwardness, in the depths of my heart, as souls dwell in bodies” there was virtually no body consciousness and persecutions of the flesh were of no consideration. On one occasion, as he was entering a village, people saw a large scorpion following him and wanted to kill it. He stopped them, saying that the scorpion had been a companion of his for twelve years. He seemed to be most oblivious to the pains of the flesh.

The story of his arrest and eventual execution has many smaller events woven into it.

On the first night of his imprisonment, his jailors came to look for him, but to their surprise, his cell was empty. The second night, not only was Hallaj missing, but the prison itself had vanished! The third night, things were back to normal. The guards demanded and explanation for these events. Hallaj replied: “On the first night I was in the presence of His Majesty (God), so I was absent here. On the second night, His Majesty was here, so both I and the prison were absent. On the third night, I was sent back!”

When Hallaj was whipped before the execution, with every strike, a voice from the unseen cried out, “Have no fear, son of Mansur.” The Sufi master Sheikh Saffar later said, recollecting that day, “I believe in the executioner’s faith more than Hallaj’s. The executioner must have had SOME strong beliefs, for the voice could be heard so clearly, and yet his hands were steady.”

My Beloved takes no blame

He gave me wine and lavished much attention upon me,

He called for a sword and the execution mat.

This is the reward for those who drink old wine with an old lion in the heat of summer.

On the gibbet, Satan came to visit him and asked, “You said ‘I’ and I said ‘I’. Why is it that you received God’s eternal mercy and I eternal damnation?”

Hallaj replied, “You said ‘I’ and looked at yourself, whereas I distanced myself from the self. I gained mercy and you, damnation.”

This is the one who had earlier sung:

Love is that you remain standing

In front of your Beloved

When you are stripped of all your attributes;

Then His attributes become your qualities.

And in his last words, he again proclaimed: “For those who are in ecstasy, the one and only Beloved is enough.”

Every part of his body cried out “Ana’l-haqq” and every drop of his blood that fell on the ground formed the name ‘Allah’. Even his ashes cried “I am the Truth”. When on the third day his ashes were spread by the wind across the water of river Tigris, the water caught fire and the words “I am the Truth” could be heard. The water began to rise and threatened to drown the whole of Baghdad. At this time his servant did what his master had instructed him to do before being led to the execution. The servant held Hallaj’s cloak to the rising river, and the waters and the fire subsided.  At last Hallaj had reached where he had always been…

For your sake, I hurry over land and water:

For your sake, I cross the desert and split the mountain in two,

And turn my face from all things,

Until the time I reach the place

Where I am alone with You.”

2 thoughts on “Legends and stories of Al-Hallaj: By Aparna Sharma”